Do you wear Crocs? 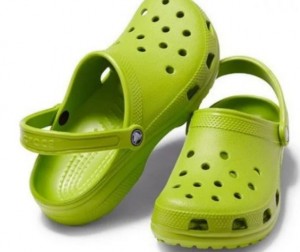 Crocs are a type of foam clog that are a popular form of footwear but are also the butt of many jokes and memes. They were originally designed as a shoe to use around water, especially boating but they were quickly purchased by many for everyday wear. Many people love their Crocs and just as many hate them and will refuse to wear them. They consider them ugly and the intensity of the colours are "yelling at them". Some even liken the appearance to special orthopaedic shoes. Those that like their Crocs think that they are so comfortable and feel so good and are so practical to use that this outweighs the looks.

There are many news stories around the world talking about how they are bad for the feet. From a foot hygiene perspective, they do make the feet sweat more, providing an environment for fungus to grow and possibly infect the foot. Blisters on the feet are more common in Crocs. They also alter toe function as the design of the shoes means that the toes have to grip more. The open back design with only a loose strap leaves your heel unstable and the foot poorly supported. A number of podiatrists report that heel and arch pain is more common in those wearing Crocs.

Several health care organisations have banned their use by employees as the holes in many of the designs are considered a safety risk. There have also been issues with the build up of high voltage static electricity being observed. Crocs have introduced a new professional range to deal with these issues. There have also been multiple reports of children wearing Crocs suffering injuries after the shoes became caught in escalator mechanisms due to the soft shoe material and the smaller size of children’s feet.

Despite all this, over 300 million pairs have been sold and the company goes from strength to strength with annual revenues of now over one billion dollars. The company was founded in 2002 and its stock is publicly traded on the Nasdaq market. The shoes have been endorsed by the American Podiatric Medical Association and other groups.

Crocs have occasionally been used as a running shoe with a number of cases of crocs as running shoes being reported. These tend to get a lot of publicity in the media and social media, but they are not widely used as sporting shoes. Those that have used them as a running shoe tend to do so for the novelty reasons. No experts are recommending that they actually be used as running shoes as their design features are not considered adequate. They will, however, be useful for all athletes as recovery footwear after a hard workout in their usual sporting footwear.

Wearing and using Crocs is a personal choice. You could be the subject of ridicule and jokes if you do, but if you are okay with that, then there is probably nothing wrong with wearing them. You do need to realize that there might be some foot issues with them, but all types of shoes have some issues.

Can I Order Crocs Shoes Online?

I am looking for expert footwear that I can use to perform. My organization's outfit rule is very tight though; can Crocs footwear be used...

Crocs has men's shoes and blocks that will keep his legs awesome and help alleviate problems with that terrible smell that comes with the...