The Chief of Propaganda, Joseph Goebbels 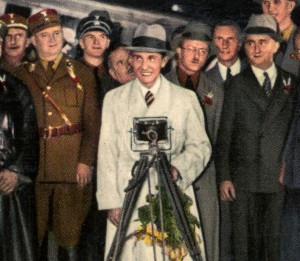 Joseph Goebbels was a German Nazi politician who was the chief propagandist for the Nazi Party, and then Adolf Hitler’s Minister for Public Enlightenment and Propaganda from 1933 to 1945. Goebbels was one of Hitler’s closest and most devoted ministers. He was mostly known for his deep antisemitism which he often frequently and loudly voiced in public. He was a strong advocate for discrimination, including the extermination of the Jews in the Holocaust.

Goebbels was born into a very strict Catholic and working-class family in Rheydt, Germany, in 1897. As a child he apparently had polio which led him to be rejected for military service during World War I. Instead of the war, he earned a PhD in history and literature and then worked as a journalist, joining the Nazi party in 1924. Ne rose swiftly through the ranks and was instrumental in building up Nazi support in Berlin by publishing a weekly newspaper, promoting posters and staging parades. When the Nazis came to power in 1933, Goebbels’s Propaganda Ministry was able to quickly gain control over the news media, arts, and information in Germany. The topics that he prompted for party propaganda included antisemitism, attacks on the Christian churches, and attempting to shape morale after World War II started. He created an atmosphere of fear and hatred, advocating and carrying out violence. During the war, Goebbels sought to keep morale high, especially when the war started to turn against Germany. He produced a steady flow of escapist films without political messaging to entertain the masses and provide a temporary means for them to escape from the high demands made upon them for sacrifice for the war effort. Goebbels had frequent discussions with Hitler about the fate of the Jews, discussing that almost every time they met. He was certainly aware that the Jews were being exterminated and was one of the few top Nazi officials to publicly acknowledge it.

Goebbels had a physical defect with his foot that did led to a lot of stress in the family when he was younger. He did his best to hide the defect. At different times he attributed the defect to the polio he might have had or to an accident. There is some evidence that it was clubfoot which could explain why be tried so hard to hide or explain it as Hitler pushed through The Law for the Prevention of Genetically Diseased Offspring, of which a clubfoot is a genetic condition and would have put him at odds with this. Goebbels enemies did like to draw a parallel between the foot deformity and the cloven hoof and limp that the Devil was supposed to have.

As the war started to look lost with Nazi Germany facing defeat, Goebbels wife and children joined him in Berlin where they joined Hitler in his underground bunker complex. After Hitler committed suicide, in accordance with Hitler’s will, Goebbels succeeded him as Chancellor of Germany. He only had the role for one day as Goebbels and his wife committed suicide on May 1, 1945, after poisoning their six children with cyanide.

1888 Press Release - Gallick assumes this position after serving as NationaLease Vice President of Dedicated Services since...

Abashley Barnett
Buy or Sell Homes in Nevada with Joseph A. Wieczorek

There are multiple advantages of acquiring properties in the Reno, Nevada. People can acquire home at affordable price and enjoy the beauty...

If inbound shipments just seem to appear on your dock without you knowing about it until they show up, you might want to do something to...