What is the 'Runner's High'? 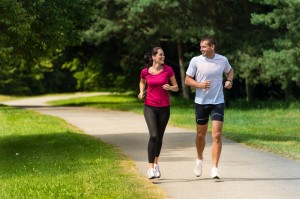 Most runners have at some stage experienced what has become known as the ‘Runners High‘. This is a sense of well-being and euphoria that runners may experience when running that temporarily helps them feel more relaxed and calmer when out on a run. Runners say that it is associated with reduced anxiety, an increased feeling of calm and a lessened ability to feel pain. It is not something that is specifically due to running and can occur with any aerobic activity such as cycling or swimming. There is, however, quite a bit of variability between runners in how they experience this and not all runners experience it or experience it on every run. Those runners who have been running for longer tend to experience it more often and it is usually only on the longer runs. Running also has longer term mental health benefits as do other types of regular aerobic exercise and this could be related to the experience of the runners high.

The existence of this runners high may be an evolutionary thing. The theory would suggest that if our bodies release chemicals to lessen the discomfort that comes with increased physical activity when that physical activity was essential for hunting for food and fleeing from predators, then this would probably increase a person’s chances of survival. This experience of the modern-day runners high that makes running more gratifying might have been something that evolved to serve as a reward that kept early humans hunting animals and gathering food for their survival.

The physiology behind what might cause the runners high is not that clear. There are a number of chemicals that are increased when exercising that could account for the mechanism. The most popular belief is that was that its due to increased release of endorphins which act in a similar way to morphine, however there is not as much support for this hypothesis now as endorphins do not pass the blood-brain barrier to have an effect there. They still do have an effect on the muscles to modulate pain sensations. More recent research has suggested the mechanism could be via the increased release of chemicals known as endocannabinoids which can alleviate pain and improve mood. Unlike the endorphins, endocannabinoids do pass the blood-brain barrier. There is come recent interest in the role of the hormone, leptin, that regulates the feelings of hunger. Research has shown that mice with less leptin would run substantially further than mice with normal levels. The authors of that research suggest that this could be because the mice that have less leptin were more likely to experience the sensation of the ‘runners high’. They linked this to the evolutionary theory by suggesting that a fall in leptin levels increases motivation for physical activity via the reward of the ‘runners high’ as a means to increase the motivation for the hunt for food in order to survive.

The best way to experience a runners high is to run more often and run over an hour or so a day. It does come with experience. A few runners, however, never seem to experience it.

You have an error in your SQL syntax; check the manual that corresponds to your MySQL server version for the right syntax to use near 'runner's high' runners high') >= 2 )AND (i.`statu' at line 6
© 2004-2022 Abilogic.com Business Web Directory. All Rights Reserved.