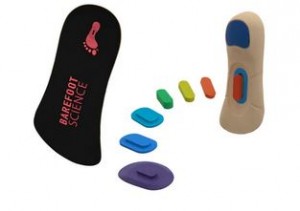 The Barefoot Science insole system is promoted as a method to strengthen the foot to cure a wide range of all types of foot problems. A dome shaped insole is used and it is claimed that this strengthens the foot. Over time the dome is removed and replaced with a bigger one to provide a greater stimulus to further strengthen the foot and improve proprioception. On the websites and promotional material for these products a lot of claims that get made for what this insole system can achieve, but very little evidence, let alone published evidence is available to substantiate the claims that get made.

Ironically, there is nothing that is "barefoot" about them and the "science" to support them is just not there despite the claims by those who market them. They are insole that are worn in the shoe, so you can’t use them barefoot. They still support the anterior part of the arch of the foot, so function like arch supports or foot orthotics. Many of the claims that promotors of this product make about the science are not supported by the science and are just made up. So are the claims that you see written on the websites and promotional material about them and also what they claim about other products such as foot orthotics. No scientific study that stacks up to scrutiny has been published in a peer reviewed journal that shows that they work like the promotors claim.

There are plenty of testimonials and anecdotes about the Barefoot Science system, but that should be a red flag as if they claim there is science supporting them when there is not and rely on the anecdotes and testimonials, then that has all the hallmarks of pseudoscience. Testimonials and anecdotes are not evidence and not science. That does not mean that they do not work and can not help people, it just means that the claims being made for them are not supported in the way that the promotors claim they are supported by the current evidence. People making the anecdotes and testimonials could have improved for any number of reasons, such as placebo, natural history of the condition and the insole simply provides some useful support where it is needed and the outcome has nothing to do with the alleged foot strengthening system. That is why if you want to make health claims about a product you need placebo-controlled studies to rule out those reasons for clinical improvements. Many other companies have found themselves on the wrong side of the law when making such claims in terms of fines from regulatory authorities and class action suits when the claims being made do not eventuate to the consumer.

There is probably no harm in trying these Barefoot Science insoles if you want to, just do not fall for all the marketing hype and pseudoscience and non-science claims that get made for them. Use them for what they are intended for. They are not a cure-all. They are just an alternative way for some sort of orthotic support in the shoe that may in some circumstances be helpful.

Will be the nike free runs Australia No cost the appropriate sneaker for you to mimic barefoot jogging? Occur

Stands out as the Nike Zero cost truly the ideal shoes that will emulate barefoot functioning? Come on individuals it's Nike! They're just...