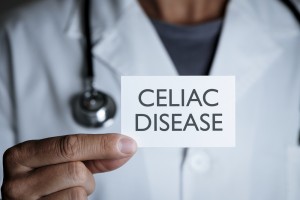 Celiac disease is an autoimmune condition where the body attacks the wall of its own small intestines. This inflammatory reaction is trigged by the ingestion of gluten. The eating of gluten triggers a response in which autoantibodies damage the villi in the small intestines and they atrophy. These villi are where the nutrients are absorbed by the body after being processed in the stomach. Over time it is that poor absorption of the nutrients that leads to most of the symptoms that appear in those with Celiac disease. Gluten is a protein that is found in wheat, barley and rye, so any food made with those ingredients are going to trigger the inflammatory reaction. Celiac disease affects about 1% of the population, but probably affects a lot more as the mildest cases are often not ever diagnosed. The cause is not known, but there is a strong genetic predisposition, so it is assumed that some environmental trigger initiates the immune response in gluten to those who are genetically predisposed. Sometimes another autoimmune condition such as Type 1 diabetes, also occurs at the same time. A skin condition that causes a rash is also often associated with this problem.

In young children the classic signs of Celiac disease are diarrhea, bloating, flatulence, abdominal pains, pale stools, constipation, nausea, and vomiting. They will vary in their severity. Over time the symptoms that start to develop because of the malabsorption of nutrients include a failure to grow, loss of weight, anaemia, and irritability. In adults the symptoms are commonly diarrhea, fatigue, weight loss, bloating, pain in the abdomen, constipation, anaemia, nausea, and vomiting. The diagnosis of Celiac disease starts with a blood test looking for the Celiac markers. This test is not diagnostic but is highly suggestive especially if the amount of the markers is very high. 10% of the time the test does return a false negative. The definitive diagnosis is with a biopsy of the small intestines via a gastroscope. This cuts out a small portion of the bowel for examination under a microscope looking for the characteristic changes of the disease process. Genetic testing is not needed to make the diagnosis but can be used as a screening tool of relatives s to see if they are at risk.

There is no cure for Celiac disease. Those who are diagnosed with it will need to maintain a gluten free diet for the rest of their lives. The damage in the intestines will slowly return to normal over time and the blood tests for the markers will gradually improve over time. Getting advice from a dietitian soon after getting a diagnosis is important. Also, at the time of the diagnosis, nutritional supplements are also given to try and correct some of the absorption problems. An iron transfusion is common at that stage. The prognosis for those with Celiac disease is excellent for those who adhere to the diet. There is research being dome on the development of genetically engineered grains that could be used by those with this condition.

Celiac disease is a serious autoimmune disorder in which the ingestion of gluten leads to damage of the small intestine, it can occur in...

@ Global Celiac Disease Market: Snapshot The global celiac disease market is prophesied to rake in a heavy demand on account of three...