How to Play Paintball for the First Time 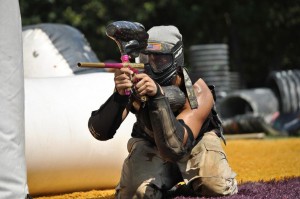 What began as a way for forest workers to mark trees, and cowboys to mark their cattle - is now marking people’s interests across the globe! The game is increasing in popularity every year, with over 3.41 million people playing it in the US alone in 2017.

There are many benefits to playing paintball. For one, it’s healthy to be outdoors, with positive impacts on your vitamin D levels, weight loss, strength, endurance, stress relief and confidence. As well as the health benefits, paintball also has a variety of social benefits, as it is fun, competitive, and can help you build and learn new skills.

Part of the game’s international appeal is that it can be different every time it’s played – with everchanging objectives, that may include taking something, bringing something, finding something, or fighting to be the last person standing!

Paintball can be played indoors or outdoor, with as few as 2 people, or as many as 500 per game. A game can last from 5 minutes to 24 hours! It may be different every time it’s played, but if there’s one thing that remains constant: paintballing is always an adrenaline rush.

Due to the vast amount of game modes and play styles, the game is suitable for people of all ages, and for many different occasions, such as birthday parties, stag and hen dos, corporate team building or tournament events.

A paintball day out is not exclusively for adults. There have been developments in the sport, with certain companies such as paintball Park Kidderminster using lighter pellets, and game modes that are less intense, so that kids as young as 8-12 are able to enjoy the sport.

?You are about to enter the game zone, it’s time to put your game face on, strap on that mask, and do not remove it until you are safely back at basecamp! This rule is vital for your safety and the protection of your eyes. Let’s play fair and remember not to shoot your gun before the game has begun.

Before you start, you’ll get the chance to walk around your field by the Marshall to establish the game zones and objective points. They will also be giving you a breakdown of the game mode you are about to play, so make sure you listen up, as there are different ways to win each game!

The marshals are here to help so if you have any questions, ask away. They will guide you to victory.

Everyone who is taking part in the game will be made aware of the dead zone (also known as the staging area). This area is a paintball-free zone, and you mustn’t shoot whilst inside it. The dead zone is the area that players must head to when they have been hit and eliminated from the game.

When a player has been hit, they must place their gun up over their head or their hand on their head and walk towards the dead zone, making the other players aware that they are out of the game, and that they can no longer shoot at you. If you think you have been hit, but are not sure, shout "PAINT CHECK," as it will alert the closest player or marshal to you to check you over. Until you have received the "all clear" you shouldn’t attempt to shoot anyone.

Depending on the field that you play at, your attire may change. We recommend comfortable clothing that allows movement, like cargo pants, joggers and a sweatshirt.

A lot of new players have said that wearing a sweatshirt calms their fears about getting hit with a paintball, as it reduces the impact.

Whatever you wear, make sure they are clothes that you don’t care too much about. Most paintball fills will not stain your clothing, but this isn’t always the case. It’s best to wear something that you don’t mind having a permanent paintball mark on.

Get Your EquipmentOnce you have registered, you will be directed to the equipment station.

You will be given the equipment you rented and get a brief overview of how it works. Be sure to ask any questions if you don't understand something, as it’s better to get the questions out of the way at the beginning, so you’re able to take full advantage of your gear when you are on the field.

You will typically receive:

Once the game has finished, all players must put their barrel cover or barrel plug back on their gun. When players have exited the field, they may remove their masks.

Knowledge is key to winning a game of paintball. Each game zone is unique and different fields have different objectives, so make sure you are aware of your mission so that you can take it on full force and conquer all, whether it is to capture the flags or total elimination of the opposing team.

Use your senses well, as they will guide you to success. You might find some of your opposition trying to play a ‘sneaky’ paintball game and try to go unseen as a means of winning by hiding behind barricades. In this case, use your eyes and ears to find them and take them out. You might be able to see them, but unable to make the shot. This is where communication with your teammates is integral because they might not have spotted someone hiding. Use your communication skills, inform the team of the hiding opposition, and it could mean all the difference between a win or a loss.

If you are playing paintball as part of a team, then use your team wisely. Communicate with them and have each other’s backs, you are more likely to win the game if you work with each other, rather than against each other.

Now you know the rules, you know how to prepare yourself with a game plan. Are you now ready to attack and win the game? You will not surrender with this guide; you will be fighting to the finish!

The most important thing to remember is not to hide in fear when a paintball is near and to have a blast! Once you get past that initial fear and get your head in the game, you will enjoy all that paintballing games have to offer. Have fun and build your team, be confident and take the other team down! Unleash the beast, we know you have it in you.

Angela Ash is an expert content writer, editor and marketer, who focuses on topics related to remote work, freelancing, entrepreneurship and more.

Things being perceived as whereas playing paintball recreation

The security techniques really needs to be mastered totally prior to participating in the paintball online games as a result of using the...

Do you love playing paintball, an extremely popular adventure sport? If yes, then it is crucial to wear a safety mask to prevent serious...

Universal Positions
How to play Paintball and How it works

A discipline that is rapidly spreading also in Italy, paintball involves the simulation of a guerrilla action with paints.It is normal that...