Can Cimetidine be Used for Warts? 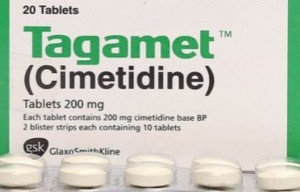 Cimetidine is a commonly used drug to treat gastrointestinal conditions. The affect of this medicine is to stop the production of stomach acid. One of these conditions is called gastroesophageal reflux disease and is the retrograde movement of gastric contents from the stomach back into oesophagus which irritates the lining of the oesophagus leading indigestion and is more commonly known as heartburn, especially after going to bed. It can also leave a sour or bitter taste in the mouth. This can affect up to 10-20% of the population. There are many risk factors that increase the chance of this happening, and they all need to be addressed over the long term to manage the problem. In the short term, it would make sense to reduce how much of the stomach acid is produced to reduce the symptoms. That is where cimetidine comes in. It blocks receptors in the cells of the stomach lining which in turn blocks gastric acid secretion. This means that there is less stomach acid to irritate the oesophagus and cause the symptoms. Cimetidine is most commonly known under the brand name, Tagamet from pharmaceutical company Glaxosmithkline Inc, but there are several other lesser known brands on the market. It was first marketed in 1976 and soon became the first of the so-called ‘blockbuster’ drugs and making a substantial amount of money for the company. It was originally a prescription only drug but is now available as an over-the-counter medicine without a prescription. The drug is not used as much today as it was in the past as other drugs have been developed that generally give a better outcome for the gastroesophageal reflux disease such as omeprazole which acts as a proton pump inhibitor.

In the 1990’s cimetidine began to be advocated for some dermatological conditions such as warts or verruca which are caused by a virus. The recommended dose from those that advocate its use is to take 40 mg/kg/day, but please consult a health professional first. The proposed mechanism for this is that the drug stimulates the immune system and a couple of studies have shown that there were different levels of biomarkers of immune stimulation in the skin of those who had warts that did get better. There have been plenty anecdotes that warts or verruca going away while taking this drug. There were several early studies that did not have control groups that showed it was very effective at treating warts. The problem is that warts tend to go away on their own eventually (which may be a long time) and are often very responsive to a placebo. The question needs to be asked does cimetidine for warts work or is it just an expensive placebo. More recently studies have been done with control groups that were blinded and given a placebo thinking it was the drug and unfortunately showed that taking Tagamet for warts is no better than taking a placebo. If you have warts or verrucae, then get advice from a health professional as to your best treatment option.

Male organ warts are an unattractive addition to a man’s equipment, and most men would like to avoid contracting them. Although warts are...

Male organ warts are a painful and embarrassing problem, and they can be notoriously challenging to deal with. While they are not...

Male organ warts are often caused by a social disease known as the human papilloma virus (HPV). The only way to be completely safe from...