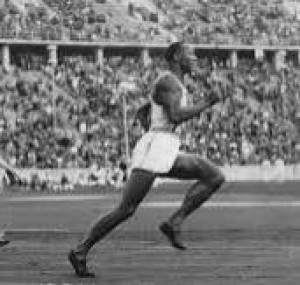 The 1936 Summer Olympics were held in Berlin, Germany and were officially known as the Games of the XI Olympiad from 1 to 16 August 1936. Germany competed with Barcelona to be awarded the games in 1931. The games were notable for the Nazi propaganda which stirred significant conflict and the exclusionary principles of Nazi party before the Games, but countries around the world still agreed to participate. The Führer Adolf Hitler was determined to outdo the 1932 Los Angeles Games so he built a new 100,000-seat track and field stadium along with six gymnasiums and other stadiums. These Olympic Games were the first Olympics to be televised and along with radio broadcasts, they reached 41 countries. The countries that did participate gave some legitimacy to the Nazi regime. The games were financially successful with total ticket revenues being 7.5 million Reichsmark which generated an operating profit of over one million Reichsmark. This did not include the outlays by the city of Berlin or outlays of the German national government so the true cost of hosting the games is not clear as they never published this information.

Hitler also saw the 1936 Games as an opportunity to market and promote his government and ideals of its racial supremacy and antisemitism. The official Nazi Party newspaper wrote prior to the games in the strongest possible terms that Jews should not be allowed to participate in these Games. The German Olympic committee following the Nazi directives, virtually barred Germans who were Jewish or had such an ancestry from participating in the Game. When the Games were threatened with a boycott by other countries, Hitler relented and allowed Black and Jewish people to participate. The German team added one token participant, a Jewish woman, Helene Mayer. This meant that many of Germany’s top athletes were excluded from participating including a couple of world record holders. Individual Jewish athletes from a number of countries chose to boycott the Berlin Olympics and other countries decided to not send any to avoid offending the Nazi regime. In the United States, the American Jewish Congress and the Jewish Labor Committee supported a boycott of the Games.

Nearly 4,000 athletes competed in 129 events in 1936. Much to Hitler’s disgust and despite taunting from the Nazi controlled local media, the black American athlete, Jesse Owens won four gold medals in the sprint and long jump events. This made him the most successful athlete to compete in Berlin. The 1500m race was won by Jack Lovelock from New Zealand. Hendrika Mastenbroek of the Netherlands won three gold medals and a silver in the swimming competition. Basketball and canoeing made there debuted as an Olympic sport at these 1936 Game. The USA won the basketball. Germany was the most successful country overall with it gaining 89 medals total and the United States coming in second with 56 medals. These were the final summer Olympics for 12 years due to the disruption of the Second World War with the next Olympic Games being held in 1948 in London, England.

Berlin, Germany. Berlin, the most important place in the Germany, is home to many amazing things. This is why the beautiful cities sees a...