What is the Windlass Mechanism of the Foot? 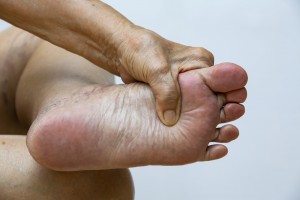 The biomechanics of the foot is a very complicated thing with so many structures having to work together to allow for an economical and pain free walking or running. All the different muscles, joints and ligaments have to work together in a timely way for normal function of the foot. A problem in anyone of the components of this complex system is going to lead to compensations in other parts of the system that may become painful and may make it harder to run or walk. This problem could be an issue with the alignment of the bones, a weakness of a muscles or a problem with the way that a joint moves. The foot is quite capable of supporting itself and does not need foot supports if everything is working well together. One intricate mechanism that the foot uses to support itself is called the windlass mechanism. The windlass consists of a strong ligament that attaches to the heel and under the big toe. When the big toe bends, the windlass is wound tight around the big toe joint and the arch of the foot comes up and is capable of supporting itself. If there is a problem with the biomechanics of the foot and this windlass mechanism does not work, then foot orthotics may be needed to get that windlass mechanism working.

There is a test that clinicians often use to assess how well the windlass mechanism is working and if any sort of foot orthotic modification in the shoe is needed to improve that function. The test is called Jacks test. For Jacks test, the person is standing barefoot with weight evenly on both feet. The clinician holds the big toe and lift it up to dorsiflex the great toe joint. As this is done the arch of the foot should raise as part of the windlass mechanism. If it does not raise or if a lot of force is needed to lift up the great toe, then this is considered to be a problem. If this windlass mechanism works easily during this test, then this is considered to be a good thing as this means that the foot is probably pretty good at supporting itself. If a problem is noted during this test then there are different modifications that need to be done to foot orthotics depending on the nature of the problem that is seen. If the force to lift up the big toe is really hard, then a foot orthotic that inverts the rearfoot and elevates the lessor metatarsal heads is usually needed to correct this problem. If Jacks test indicates that there is a delay in the windlass mechanism, then something like a Cluffy Wedge is needed to lift up the big toe early when walking so that there is no delay. This Jacks test is not the only test that is used to help determine the type of foot orthotic needed, but it is the one that is most widely used to assess windlass function to change what might be needed in foot orthotics.

Although you have sufficient medical marvels to thwart ailments, prevention remains a crucial inference. The foot doctor Columbus showcases...