The History of Healesville, Victoria, Australia 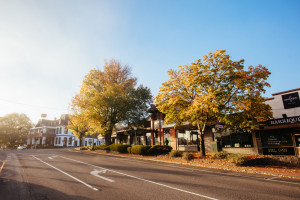 Healesville is a town in rural Victoria, Australia about a one hour drive from Melbourne's central business district. It is located on the Watts River, that flows into the Yarra River. It is probably most well-known for the zoo, Healesville Sanctuary. The town has a local population of 7589 in 2021, but that is often swollen with tourists. The town was first settled in 1864 mainly as an accommodation site for the goldfields and for construction of the Yarra Track and was named after Richard Heales who was the Premier of the state of Victoria from 1860 to 1861. Healesville lies on the ancestral land of the indigenous Wurundjeri people. A reserve for the Aboriginal people known as Coranderrk was set up in 1863 south of the main township. Apart from tourism the main employment in and around Healesville is based on industries such as sawmilling, horticulture and viticulture. Healesville has been a tourist destination since the 1880s, with the Grand Hotel being built in 1888, and the Gracedale House being built in 1889. As well as the Healesville Sanctuary, the tourism is based around the wine and food industries of the Yarra Valley, with other attractions including the Badger Weir Picnic Area, Yarra Valley Railway and the Healesville Organic Market. There are also numerous cafes and restaurants, and volunteer-run events such as the Healesville Music Festival, Open Studios, and the Yarra Valley Rodeo that attract people to visit for the day from Melbourne or for a holiday. A tourist association was first formed in the 1920s to promote the region. Healesville is the southern end of the Bicentennial Heritage Trail that has its northern end at Cooktown, Queensland, north of Cairns. The trails us 5330 km making it the longest trail of its type in the world.

The Healesville Sanctuary which was formerly known as the Sir Colin MacKenzie Sanctuary is a nature park or zoo with hundreds of native Australian animals that are displayed in a semi-open natural setting. MacKenzie set up the Institute of Anatomical Research in 1920 on 78 acres of Coranderrk. In 1927 it was passed on to the Healesville Council becoming the Sir Colin MacKenzie Sanctuary in 1934. Healesville Sanctuary are now one of the few zoos with an active platypus breeding program, breeding their first in 1943. In 1978 the Sanctuary was placed under the management of the Victorian Zoological Parks and Gardens Board. The Sanctuary is set in a natural bushland environment where paths wind through different habitat areas that showcases wallabies, wombats, emus, dingoes, kangaroos and over 200 native bird species. Visitors typically spend 2 to 3 hours to get around the zoo and take in a flight show with native birds. In 2009, the sanctuary was threatened by the serious Black Saturday bushfires that devastated a lot of the region. A lot of their threatened animals were evacuated to Melbourne Zoo at the time. Healesville has an active Country Fire Authority volunteer fire brigade which was established in 1894 that played a major role in fighting the fires in the region at that time.

The Healesville Retreat: Building up families of children with cancer

"The family is fractured when a child is diagnosed" says David Rogers, CEO of Challenge, a support organisation for families of children...

Florist Forest Hill Victoria is one of the many flower centers that serve the people of Melbourne, Australia. It has