Where did Ebola start? 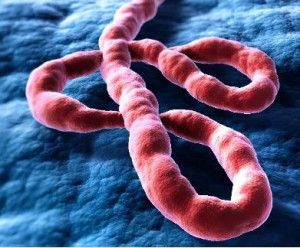 Ebola is one of the deadliest viral diseases known to affect man. It was first discovered in 1976 after outbreaks of a fatal type of haemorrhagic fever that occurred in different parts of Central Africa, in the Democratic Republic of Congo in a village located near the Ebola River and then another in Sudan about 500 miles away from the first one. It was assumed that both were the same event transmitted by a traveller but later genetic analysis showed that they were caused by different strains of the Ebola virus. Subsequent analysis of the virus and epidemiological data indicate that the Ebola virus existed for a long before these two first recorded outbreaks occurred. The virus probably spread via population growth, the encroachment of civilization into forested areas, and direct interactions with wildlife. Since that first discovery in 1976 there have been a number of cases and outbreaks of Ebola Virus Disease occurring in Africa with the 2014-2016 Ebola outbreak in West Africa starting in rural Guinea being the worse. It soon spread to urban areas and then across borders within weeks. Within a few months it became a global epidemic. During this outbreak healthcare workers accounted for 3.9% of Sierra Leone, Liberia, and Guinea, whereas in a previous outbreak in Kikwit in 1995 healthcare workers accounted for 25% of all infections at that time. In 2014-2015 the majority of transmission events occurred were between family members, mostly by direct contact with the bodies of those who died from Ebola. Public health interventions to change behaviours related to mourning and burial and using safe burial practices, were critical in controlling that epidemic.

At the time of that first outbreak of Ebola in 1976, a lot of work was put into identifying the host and the mechanism of transmission of the disease so that information could be used to control outbreaks. Scientists studied thousands of animals, insects, and plants in search of a source and reservoir and finding the source proved to be very difficult as the reservoir host of the Ebola virus probably does not experience any acute illness, so it is maintained in the environment by spreading from host to host or through intermediate hosts or vectors until it appears as an acute illness in humans. The African fruit bats have been identified as most likely involved in the spread of the Ebola virus and may even be the source animal, but this is not fully confirmed yet. In the early outbreaks, the use of contaminated needles and syringes probably enabled transmission of the Ebola virus. There are reports that during that first 1976 outbreak in the Democratic Republic of Congo, nurses in a missionary hospital used just five syringes for 300 to 600 patients a day. The close contact with infected blood, and this reuse of contaminated needles as well as improper nursing techniques were probably the source for much of the human-to-human transmission during early Ebola outbreaks. Now that so much more is known about the transmission of the virus and the risks associated with various health practices, that risk is much lower and any outbreaks are usually quickly brought under control.

Is news about Ebola virus spread in India ‘a Hoax’?

Anshikha Raj
Fingerprint Sensors can help fight pandemics like that of Ebola.

The Ebola outbreak that began in late 2013 left West Africa devastated, with estimated decline of $1.6 billion in 2015 GDP, and the greatest...

Anthony Harrelson is a dedicated business professional and medical expert who is currently serving as the Chief Executive Officer and...