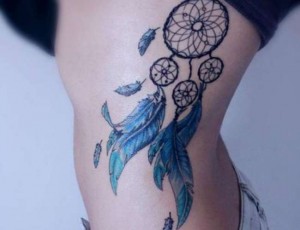 Dreamcatcher tattoos depict a powerful symbol that focuses on bringing positivity to a person through dreams. Dreamcatchers belong to the Native American culture. It is a charm that filters dreams and allows only the positive ones to go through it.Originated in the Anishinabe and Ojibwa tribes, the charm is especially meant for babies. As babies are tender, the dreamcatcher protects them from the harmful vibrations of negative dreams.

The original meaning of dreamcatcher

As per popular legend, the spider-woman was responsible for the creation of dreamcatchers. She would personally pay a visit to each newborn and weave the charm over his crib. However, as the time progressed, the Native American tribe became large and some of the families moved to distant places. Consequently, the spider woman could no longer visit every child. Hence, the dreamcatcher was then woven by the mother of the child and hung over the baby’s crib. Despite the legend being old, dreamcatchers are still created by many Native American mothers for their newborns.

Design of the dreamcatcher

For knowing the dreamcatcher tattoo meaning, you need to understand the basic design of a dreamcatcher. It consists of a hollow ring in which a mesh pattern is created by using a red colored thread. The mesh is supposed to get hold of dreams and let pass only the good ones. For making the charm appealing to the baby, it was decorated with feathers. Generally, the feathers are hung at the bottom of the ring so that the baby would see it clearly and enjoy watching them move in the wind. The feathers were also thought to have the power to make the baby fall asleep faster. Many legends also state that the feathers were actually hung to direct the good dreams towards the baby’s head.

Although the charm is meant for babies, a dreamcatcher tattoo has fascinated many an adult. People now understand how positivity can have a good impact on their lives, and for this reason, they welcome things that promise it. Dreamcatcher tattoos are now believed to have the power of heralding a positive phase. People, after getting the tattoo, feel emotionally charged and protected from negativity. Dreamcatcher tattoos are for everyone and they can be modified with a view to enhancing their looks and qualities.

The tattoo is now considered a charm that protects the wearer. Its strong legend has given rise to several beliefs. The most popular one is protection from evil spirits. People, believe that while they are asleep, their dreamcatcher tattoo would not let negative spirits affect them. The tattoo is combined with other elements of nature like trees, birds, leaves, and feathers. They are the boosters, which make the dreamcatcher tattoos even more powerful. The tattoo is also preferred by people, who respect the Native American culture, and by getting it, they show their love for it.

Placement and design of dreamcatcher tattoos

According to modern belief, the tattoo should be easily visible so that the negative energy stays away. Nevertheless, you could choose to have it anywhere you want. A large area like chest, arms, back, and thighs can actually allow the tattoo to be complex. Your tattooist could make the mesh pattern intricate. People choose to get dreamcatcher tattoo designs in the shape of an 8 pointed star, heart, flower, bunch of leaves, scenery etc. A small tattoo will generally be simpler for the sake of neatness. However, as many tattooists are highly skillful, you could try out a small dreamcatcher tattoo with an intricate design.

A multiple-hoop dreamcatcher tattoo is believed to be stronger, as it has more rings. There is no limit to the number of hoops. Mostly, the hoop at the center is the largest one and other rings are tattooed either below or around it. The feathers are arranged in such a way that every hoop has a few. The different sizes of the hoops make the tattoo look delicate.

The feathers of the tattoo could be of any bird you want. If you are a woman and traditional then you should choose to have feathers of an owl. They represent intelligence. For men, feathers of an eagle are considered best, as they depict fearlessness. Try a decorated dreamcatcher tattoo, which would include beads and gemstones. For decoration, the color red is preferred. Hence, you could have red ribbons, beads, gemstones, etc. Like many others, you could also have a quote tattooed with it. Choose any positive one and let your tattoo do the talking.

3-D dreamcatcher tattoo designs are highly sought after. The reason is the realistic feeling that the tattoos have. These dreamcatcher tattoos look best in combination with other elements like a baby, crib, human eye, rabbit, howling wolves, spider woman, etc. Precisely, you could have anything tattooed with a dreamcatcher tattoo and attract everyone’s attention.

Rahul Kanthale
Everything you need to know before buying Tattoo Machines

Tattoos transform the body into an art of work. They help the person tell a story and manifest identities with ease! It is for the same...

Shailesh Gajjar
Like it; Ink It: Tips on choosing the Best Tattoo Inks for you

The business of tattoos is very serious. From honing your skills to choosing the best tattoo equipment, tattoo artists need to bring their...