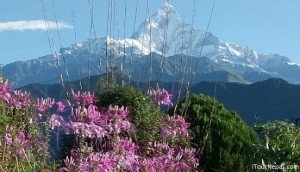 December till February is winter in Nepal. The vertically rising landscape makes the weather and temperature different from places to places. But one thing is certain that winter is not the best time for high altitude treks. But the crisp sky, warm and sunny days with crystal clear view of the Himalayas makes it the best time to do Nepal tour with short treks in the foothills.

Winter is actually the best month to visit tropical southern plains and the Himalayan foothills. Temperature varies from average maximum 20 degree to – 8 degree centigrade between tropical planes to the Himalayan foothills during the coldest months. Winter days are dry, sunny and warm during the day. The temperature reaches minimum at night which could be managed with heating facilities at hotels and warm clothing.

Since high altitude treks are closed, the number of tourists visiting during winter goes down by one fourth. This offers low costs and it is less crowded. Since it snows in the Himalayas, the mountains appear even more photogenic. Local tourists as well as tourists from Southeast Asia go on a short trek in Nepal during the winter months to play with snow.

Here are some of the winter travel tips for Nepal

December is the beginning of winter. It is still possible to do popular treks to Annapurna base camp and Everest base camp in early December. Nepal in December sees more tourists for short treks and cultural tours. The good weather of November continues with temperature dropping every day. January is the coldest month best for only cultural tours and short hikes. End of February may have too much snow in the high altitude treks. Here are some of the best Nepal tours and treks recommendations for winter.

Short treks in Nepal during winter

There are several popular short treks in the foothills of the Himalayas which could be done throughout winter. These short treks last from 3 days to one week and allow one to have up-close view of the Himalayas. Maximum altitude of the short treks reaches between 2,000 m to 3,500 m. There are well established teahouses and luxury lodges for accommodation which remains open throughout winter. Ghorepani Poon Hill trek, Shivapuri trek, Langtang and short Everest trek to Namche bazaar or Tengboche are the most popular short treks for winter. Winter trekking guarantees clear view of the Himalayas with fewer trekkers along the trail.

Winter is also the best time to on a Nepal tour. Kathmandu Chitwan and Pokhara are known as ‘Golden Triangle of Nepal’. These valleys are in the foothills of the Himalayas and it never snows. While Kathmandu is 1,350 m, Pokhara is just 800 m above the sea level. Chitwan national park is in the tropical southern planes with the altitude of 150 m. The hill station towns like Nagarkot and Bandipur gives best insight of country side lifestyle and the Himalayan scenery. Winter tour of Nepal could be combines with hiking around Kathmandu and Pokhara as well. A tour could be planned from 5 days to two weeks.

Winter months of December, January and February is actually the best time for Buddhist circuit tour. Lumbini, the birthplace of Buddha is in the southern planes closer to India. There are also few other important Buddhist pilgrimage sites around Kathmandu at not higher altitude than 1,700 m. Buddhist pilgrimage tour of Nepal is about 9 days spiritual tour visiting the birth place of Buddha and meditation caves of Buddhist masters like Guru Rinpoche (Padmashambhava), Nagarjuna and Milarepa.