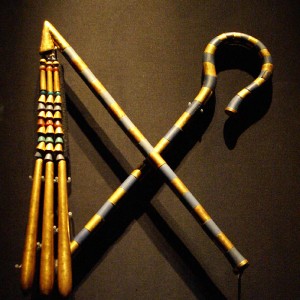 The Majestic of Ancient Egyptian Symbols

Life in ancient Egypt was a fusion between the spiritual and the physical aspects of their culture in the form of artistic architecture, symbols, amulets and many objects that were used to bring good fortune and protection. These Symbols played a vital role into passing the culture from one generation to another, as they were written on temple walls and obelisks and used in magical and religious rituals for both the living and the dead. They were depicted in the form of hieroglyphs and treated as "The Words of Gods" used to document the most important events in ancient Egyptian History, their spiritual believes and culture.

We will begin exploring some of the most amazing ancient Egyptian symbols:

Ancient Egyptian Symbols One of the most famous and used symbols of ancient Egypt and the world. It’s a cross with a looped top in a key- like a shape, which represents eternal life, the morning sun, purifying, the life-giving power of water, clairvoyance and the union of opposites like earth and heaven and male and female (Isis and Osiris). The symbol is associated with "The Knot of the Goddess Isis" and her powerful cult between (c. 3150 – c. 2613 BCE). It’s also known as crux ansata by Coptic Christians which represent life and immortality. That symbol appears in paintings, on temples walls, and in tombs as it was the key to existence, and used as an amulet to provide divine protection.

Ancient Egyptian Symbols Known as "The Backbone of Osiris", It represents strength and stability and linked to Osiris god of the underworld and Ptah god of creation which makes it a symbol for resurrection and eternal life. Ancient Egyptian believed the Djed pillar was the combination of four pillars that held the four corners of the earth. It was also used as a fertility pole raised during festivals which emphasized balance in life and hope in the afterlife, provided by the great gods of Ancient Egypt. A Djed column is often on the bottom of coffins where the backbone of the deceased would lay in order for the soul to stand up and walk into the afterlife.

Ancient Egyptian Symbol It was a symbol of power and dominion of the god and king in ancient Egyptian history and culture. The staff is topped with the head of a canine. It was developed in the time of the king Djet (c. 3000 – 2990 BCE) of the first dynasty. Each god had his own was specter-like Hathor, Isis, Ra, and many others. The god Ptah was able to combine the Anka, Djed and the Was into his scepter, that was the only thing that fit his holiness, it is known as "Sculptor of the Earth" which presented the absolute meaning of completeness and totality.

Ancient Egyptian Symbol One of the most well-known symbols of ancient Egypt during the first intermediate period (2181-2040 BCE) until the rise of Christianity. This symbol is seen in Egyptian art and iconography which is a species of the dung beetle. It rolled the dung into a ball and laid its eggs in it and the dung served as food for the young when they hatched. Ancient Egyptians saw life coming from nothing which represented transformation, the recreation of life and resurrection. The scarab was identified with the God Khepri who was more like Ra assistant, that roll the ball of the sun across the sky.

Ancient Egyptian Symbol Also known as Tiet/Tyet, known as the knot of Isis or the blood of Isis, that looks a lot like the Anka symbol except for its arms curved down. It was used as a funerary amulet made of a red stone or glass and was associated with many goddesses as well as Isis. It symbolizes the ideas of eternal life and resurrection. It often paired with the Ankh offering the protection and security of both Isis and Osiris.

Ancient Egyptian Symbol Lotus The lotus symbol is considered to be a true icon in Egyptian mythology and ancient Egyptian art. The flower a.k.a"Water lily" closes at night, sinks underwater then wakes up in the morning, that’s why it became a symbol of the sun, creation, and regeneration. The Lotus has associated with Atum-Ra the sun god as a giant lotus emerged from the primordial waters of Nun and from which the sun-god appeared, and the cult of Osiris as the symbol was related to funeral imagery and with the deceased entering the underworld which symbolizes reincarnation. The symbol was commonly used in the art to represent Upper Egypt. It was found in honored places all over Egypt, on the architecture of the capital tops of Egyptian pillars representing the tree of life, in the tombs, in Hieroglyphics, written in papyrus, found on thrones and the headdresses of the divine pharaohs.

Ancient Egyptian Symbol A circle of rope that has no beginning and no end, in order to form an unbroken bond which symbolizes infinity, completeness, eternity and protection which made its symbol extremely popular and well – presented. The word "Shen" comes from the Ancient Egyptian word which means "encircle", the amulet of Shen was worn by everyone including kings. Many deities like Horus and Isis are seen holding the Shen which made the ancient Egyptians honor the Shen as a symbol of symmetry and perfection.

Wadjet (The Eye of Horus)

Ancient Egyptian Symbol Also Known as (Uto, Udjat, Wedjat) the Eye of Horus represents healing, protection, good health, and royal power, it’s the most famous of ancient Egyptian symbols. The left eye belonged to the sky god Horus who gave it away to save his father Osiris. This symbol is extremely famous and powerful at that time as it had healing powers and was used as a medical tool to measure the ingredients while making the medicine. The eye represents the moon and considered a symbol of sacrifice. His right eye is known as the eye of Ra the sun god.

Ancient Egyptian Symbol One of the symbols of the sun, it represents the travels of Aton, one of the aspects of the sun god. Its represent rebirth, perpetuity, and recreation. The symbol was created when Atum out of the dark waters in the form of a serpent renewing itself every morning. It is known as an infinity symbol, it’s used in many different cultures like in the Greek and Norse mythology.

The Egyptian mythology includes great stories to discover, you can buy and witness these memorable symbols by booking unforgettable Egypt tour packages or enjoying incredible Nile cruise to observe the majestic temples of Egyptian pharaohs and explore the myths of gods and goddess.

The Egyptian Museum in Cairo, Egypt, is home to the most extensive collection of ancient Egyptian antiquities in the world. Know more! THE...