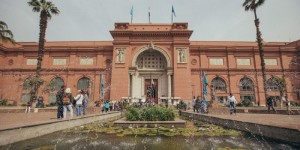 The Egyptian Museum in Cairo, Egypt, is home to the most extensive collection of ancient Egyptian antiquities in the world. Know more!

THE EGYPTIAN MUSEUM IN CAIRO

Centrally located on the edge of Tahrir Square in Cairo, the Egyptian Museum is hard to miss on any tour of Cairo. Opening in 1902, it was purpose-built to house the antiquities of Ancient Egypt. Inside is the greatest collection of Ancient Egyptian archeological history in the world.

Egyptian Museum address is:Tahrir Square at Downtown, Cairo. Egyptians refer to Downtown as Wust al-Balad, or in other words "The heart of the city". The reason of calling it so is because the Downtown area is the part of the city that is full of life and activities. Cairo is sometimes called "the city that never sleeps" of Egypt, and so for Downtown. It is not only the heart of Cairo, but also the center for every life activity and facility, and the hub for different cultures. Downtown is famous for Midan Talaat Harb and Midan Tahrir.

CONTENTS & ITEMS ON DISPALY IN THE MUSEUM

The Egyptian museum in Cairo houses over 120,000 artifacts, including the contents of Tutankhamen’s tomb and most of the mummies that have been discovered since the 19th century. The museum’s exhibits span from the beginning of the Old Kingdom of Ancient Egypt (approximately 2700 BC) through the Greco-Roman period.The building consists of two floors. On the ground floor, you can follow the history of Egypt from the Old Kingdom up through the Greco-Roman period by turning left at the entrance and looping around the museum. This provides a good background for most of Egypt’s ancient history.

Upstairs the museum is organized thematically with a large portion of the area taken up the exhibit of the contents of Tutankhamun’s tomb, including his famous funerary mask. Also upstairs is the room dedicated to the beautiful jewelry discovered in the Royal Tombs of Tanis. Another highlight of the museum, the Royal Mummy Room, requires the purchase of a separate ticket. Inside you can see the mummies of some of Egypt’s most famous pharaohs, including Ramesses II, Seti I, and Egypt’s only queen, Hatshepsut.

The museum has so much to offer that it can be overwhelming. It suffers from the fact that much of the contents have not been relabeled or reorganized since they were first arranged in their cases over a century ago. The result is that some sections provide very little context for the artifacts and labels are shown in a variety of languages- French, English, Greek, German, and Arabic. The difficulty of navigating the exhibits is a common complaint by visitors and a good reason to have a guide with you.

The Egyptian museum, also known as the museum of ancient Egyptian civilization, houses some of the world’s most important collections of ancient artifacts. Inside the walls of that great and old pinkish building located in Downtown Maidan Al-Tahrir, the priceless treasures of King Tutankhamun and some other ancient Egyptian greatest pharaohs, along with the belongings, mummies, jewellery, and food bowls of Ancient Egyptians that were buried with the kings to use in the afterlife as believed by the ancient Egyptians.

The Egyptian museum in Cairo houses a great and enormous collection of artifacts, mummies, coffins, stones, ancient belongings, and even food types that used to be buried with the kings before death to use in the afterlife. As part of the ancient Egyptian beliefs and religion, ancient Egyptians used to bury the dead with all their belongings as they believed that they will use their clothes and food when they pass to the After Life.

As an interesting fact, Kings were buried with not only their material belongings, but also with their "servants". The Museum’s collection is growing rapidly as archaeologists make new discoveries over time. For instance, Tutankhamun’s enormous tomb and the impressive discoveries that were made inside it, and the tomb belongings of Tanis which were both discovered after the museum opened. Now the museum has more than 100,000 ancient objects inside its walls. Some objects were moved to the new Grand Egyptian Museum, while most of them are still in the main museum in Tahrir. The museum in Tahrir will remain the major spot for the ancient Egyptian heritage, even after the opening of the Grand Museum. In 1835, Mohammed Ali, the ruler of Egypt at that time, completely banned the export of ancient antiquities in order to protect the country’s heritage.

SECURITY AT THE MUSEUM

As for security issues, until the year 1996, the museum’s security was all about just locking the door at night. However, that wasn’t enough as thieves were managed to let themselves in. As a result, the museum’s authorities applied some alarms and detectors for security issues along with improving the lighting system for the whole museum. During the Egyptian revolution in 2011, the museum was attacked by thugs and some artifacts were stolen. At that time, civilians reacted quickly and courageously to prevent further theft. They formed a human chain around the building in Tahrir to secure it, and they managed to protect the museum.

THE DISPLAYS OF THE OLD KINGDOM

The Old Kingdom in ancient Egyptian history, also known as the "Pyramids Builders Period", was a very vital period that left us so many remarkable artifacts and objects, and that’s why it has a huge section in the museum. Some of the most important achievements of that period are the Pyramids of Giza, the Step Pyramid of Saqqara, the Pyramids of Dahshur, and the Pyramids of Abu Sir. As a part of the Old Kingdom, there is that statue of King Khafre which is made out of alabaster. It is put on display in the second half of the ground floor of the museum. The Museum Of Egyptian Antiquities also houses a huge collection of small statues of servants carrying out their everyday duties and responsibilities, as a representation of everyday life at that time.

THE DISPLAYS OF THE MIDDLE KINGDOM:

The Museum houses ten of the most remarkable statues that date back to the Middle Kingdom. The ten statues portray King Senosert I, who belongs to the 12th dynasty and all of them are made out of limestone. The Middle Kingdom period started in Egypt after the fall of the Old Kingdom and it wasn’t really a great period of the ancient Egyptian history in every aspect. At the beginning of the 12th dynasty, the living conditions of the ancient Egyptians were significantly improved and even arts, industries, and artifacts witnessed a great improvement.

However, when the living conditions went bad, Egypt went through a transitional period once again, as the nobles fought among each other. Such corruption and chaos lead to the Hyksos invading the country. King Ahmose was able to defeat the Hyksos and bring back Egypt’s freedom. After that, Ahmose founded the 18th dynasty, which was the first dynasty of the New Kingdom.

You can Visit the Egyptian Museum by booking one of our Cairo Excursions.

The Egyptian Museum, which holds the largest collection of ancient Egyptian artifacts in the world, is centrally located right off of...