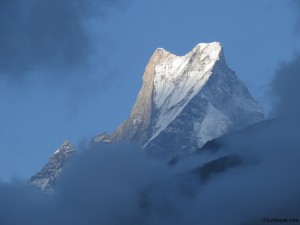 Unlike many think, Nepal is one of the best nature holiday destinations in Asia for the month of January. Most of the commercial guide books are judgmental about Nepal holiday in January. However their judgment is based on trekking. Yes January is peak winter and is not the best time for high altitude trekking. But they forget that Nepal also has tropical southern planes and many hill stations and cultural sites are much below snow line. In fact, the winter snow over the Himalayas makes the scenery even more beautiful during the month of January. The January days are sunny and warm with crisp sky. January has only couple of days of rain. The comfortably warm day temperature makes hiking and short treks pleasurable. The clear sky and the winter snow over the Himalayas make the view most amazing throughout the winter.

January is definitely not the best month for trekking. However the holiday destinations of Nepal range from 100 m to 3,000 m above the sea level. The temperatures of these destinations range from 18 degree centigrade to – 6 degree centigrade during the month. Days are warm and sunny with clear sky. It may snow at the 3,000 m but everything remains open. The snowfall makes the scenery more picturesque. The minimum temperature of – 6 degree centigrade is recorded at night. Proper equipment and warm cloths make the short treks more comfortable and enjoyable.

More than 50% of the tourists travelling to Nepal don’t go on a trek. There are several ways of admiring the Himalayas and immerse into Himalayan culture and nature. Diverse landscape, culture and ecology makes it vibrant place for holiday in nature. Escape to its hill stations or cruise through its tropical jungle; go on a short trek in the foothills of the Himalayas or seek for inner joy in the land of Buddha’s birth place; there is holiday for everyone.

Three of the four UNESCO heritage sites in Nepal; Kathmandu, Chitwan and Lumbini are in the tropical and subtropical regions. The popular hill station towns like Nagarkot, Bandipur, Gorkha and Sarangkot rarely gets snowed. Since high altitude trekkers don’t visit during January, tour destinations are less crowded and services are easily available. The visit of regional Buddhist pilgrims during the winter months makes the Buddhist sites lively and culturally rich.

The most popular Nepal holiday during the winter months are : Tour of Kathmandu, Chitwan and Pokhara; Buddhist pilgrimage tour and short trekking holiday.

Kathmandu Chitwan and Pokhara are the most popular valleys in the Himalayas which represents the best of the region’s culture, nature and wildlife tour. The tour of those three places is also known as the golden triangle of Nepal. Nepal tour could be organized from 5 days to two weeks with visit of hill station towns in between. Availability of luxury hotels and flights between the cities make the Nepal holiday pleasant for everyone.

The month of January is also best time to go on spiritual journey. The intricate geography and daunting mountains of Nepal sheltered several ancient cultures and religious practices from the continent untouched until the date. This has been a place of retreat and enlightenment for several spiritual masters. Moreover Lumbini, the birthplace of Buddha is also in Nepal. January sees increased no of pilgrims visiting from Tibet, Bhutan and Himalayas of India.

For those looking for active holiday, there are several scenic treks in the foothills. Short treks could be organized both in Annapurna and Everest region.

The Chinese New Year holiday in Southeast Asia increase the number of tourists in Nepal during the end of January and early February. Nepal have also been cheap and easy CNY Holiday destinations. However Chinese New Year changes from late January to February according to lunar calendar. Chinese New Year 2020 falls in January 25 while it is on February 12 in 2021.

So if you are living in Asia or getting holiday in January, Nepal is one of the best holiday destinations. Enjoy the benefit of low season and the clear sky of winter.