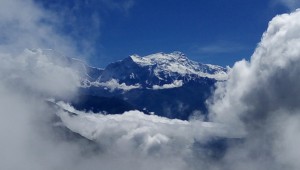 Nepal has something to offer for travelers throughout the year. The vertically rising landscape from tropical to trans-Himalayan region creates different climatic zones suitable for treks and tours all around the year.

August is middle of the monsoon rainy season and almost the end of summer. In general the weather remains cloudy and rains mostly in the morning, evening and at night. When the sun is out, it is hot and humid. Most of the places are wet; river floods and the trails are muddy. Travelling to Nepal in August will be rewarding with right itinerary and proper preparation. Even though August is beginning of main tourist season, it is definitely not the best time to go on popular treks. Tourists mostly visit hill stations, cultural sightseeing and day hikes in the Himalayan foothills. Few treks in the trans-Himalayan regions are dry and more preferable as the Himalayas create the rain shadow. Scenery appears extra beautiful with dazzling green everywhere, crisp sky and snow peaks playing hide and seek through the clouds. August is also best time to experience local culture as it is beginning of the festival season.

August is the second half of monsoon and the rain starts to relent by the end of the month. The intermittent rain continues till the end of September. It is also summer and the days are hot and humid when there is no rain. Temperature in the middle hills ranges from 15 to 28 degree centigrade. Rain cools it down depending on the altitude. Temperature in the trans-Himalayan region like Mustang ranges from 0 to 16 degree centigrade. It rains more towards western part of Nepal than in the east. Trans-Himalayan region gets only the one tenth of the total rainfall making it the driest places to trek in August.

August is best for cultural sightseeing, day hikes and visit of hill stations in the Himalayan foothills. One can easily spend two days to a week exploring Kathmandu valley. There are seven groups of monuments making Kathmandu a UNESCO Heritage site. The hills around Kathmandu provide wonderful day hike with comfortable accommodations overlooking at the sweeping valley with snow peaks the background.

Since there will be fewer tourists, August is also best time to go on a spiritual tour of Nepal. Being in the remote mountainous region, Nepal sheltered several spiritual practices from the ancient Indian subcontinent. While India and Tibet were under continuous turmoil of invasion, Nepal remained aloof to the outside world. The Himalayan sanctuaries have been favorite retreat for spiritual masters of Hinduism, Buddhism and Tantrism. With harmony among different practices, Nepal is the best choice to go on spiritual journey.

Treks in the trans-Himalayan region are the best for August. Himalayas blocks monsoon clouds causing very little precipitation on the other side. Mustang and Dolpo are the two most popular trans-Himalayan trekking for August. While Dolpo is more remote, costly and time consuming, Upper Mustang Trek could be done in two weeks. Jomsom, the district headquarter of Mustang is reached by 18 mints flight from Pokhara. Upper Mustang is known as the ‘lost Tibetan Kingdom’ for it peacefully remained Buddhist kingdom until the date. The region is politically in Nepal but culturally and geographically it is Tibet.

August is also beginning of the festival season in Nepal. As the workload of planting rice is over, people will have enough time to rejoice. The full moon day of August is celebrated by Hindus as Janai Purnima. People throng at temples to get welfare thread with Vedic chanting. Devout Hindus change their sacred threads and everyone have fest of special meal. Teej is another interesting festival that falls in August. Women take break from their routine and rejoice with singing, dancing and feasting. They throng in the Shiva temple to perform ritualistic offerings and prayers to lord Shiva for long life and prosperity of their husband. Gathemangal and Gai Jatra are other interesting festivals mostly celebrated inside Kathmandu valley in August. Less tourist, reduced price and cultural performances in the streets add bonus to Nepal tour in August. By preparing for the rain and choosing the right itinerary, the visit is highly rewarding.