The City of Christchurch, New Zealand 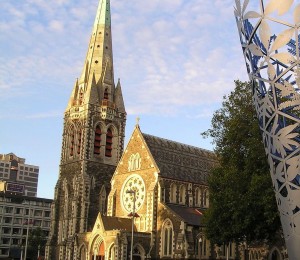 Christchurch is a city in province of Canterbury in the South Island of New Zealand which is often referred to as the most English city outside of England. It is also often called the Garden City as it has so many spectacular gardens. The city area has a population of just under 400 000, making it the second largest city in New Zealand after Auckland. The Avon River flows through the centre of the city with many parks located along its banks with Hagley Park being a central feature of the city. At the centre of the city is Cathedral Square featuring the landmark Anglican cathedral which is currently being restored following earthquake damage.

The farming and agricultural industry is the economic core of Christchurch and the bulk of the initial industry there was set up to service that. Tourism is now also a significant factor for the local economy, with the city marketing itself as a gateway to the South Island with its spectacular scenery, skiing and adventure tourism. It is also the gateway to the Antarctic, with the city having a long history of involvement in Antarctic exploration. It has an International Antarctic Centre that provides both base facilities and a museum with a visitors centre. The United States Navy uses Christchurch Airport as the take-off point for the main supply route to its McMurdo and Scott Bases in Antarctica.

There is some evidence that people first settled in the Christchurch region in around 1250. Settlement took off early in 1840 following the purchase of land in what is now Riccarton by the Weller brothers and a group of European settlers led by Herriott and McGillivray established themselves in what is now Christchurch, early in 1840. The Canterbury Association chartered The First Four Ships to bring 792 of the Canterbury Pilgrims to Lyttelton Harbour. The sailing vessels were the Randolph, Charlotte Jane, Sir George Seymour, and Cressy. The Charlotte Jane arrived first on 16 December 1850. These Canterbury Pilgrims wanted to build a city around a cathedral based on the model of Christ Church in Oxford, hence the name of Christchurch.

A number of significant events have shaped Christchurch. In 1947, a fire occurred at Ballantyne's Department Store in the central city with 41 people being killed in a blaze which destroyed the collection of buildings. It is still New Zealand's worst fire disaster. Between September 2010 and January 2012 the city suffered a series of major earthquakes with the worst being on Tuesday 22 February 2011 with 185 people being killed and thousands of buildings collapsing or suffering severe damage. Following the earthquakes over 1500 buildings in the city had been demolished, leading to a still ongoing recovery and rebuilding project. The city did experience some rapid growth following the earthquakes. On 15 March 2019, 51 people were killed during two terrorist attacks at Al Noor Mosque and Linwood Islamic Centre by a white supremacist who travelled from Australia. These terrorist attacks were described by Prime Minister of New Zealand, Jacinda Ardern as "One of New Zealand's darkest days".

When thousands of people are looking for Auckland loans, Wellington loans, Christchurch loans, Nelson loans, Dunedin loans or a loan from...

Christchurch is the largest city in the South Island and third-most populous city of New Zealand after Auckland and Wellington. An urban...

Christchurch is an immense city in New Zealand which boasts everything from lush gardens and excellent cultural institutions to a mixture of...