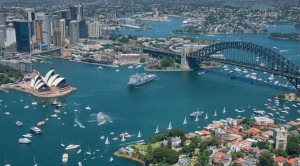 Sydney is a city in the state capital of New South Wales in Australia. It is the most populous city in Australia with a population of about 5.3 million people located in 658 suburbs. It is probably most well known for the iconic Sydney Opera House and the Harbour Bridge and hosting the 2000 Olympic Games.

The Sydney area has probably been inhabited for at least 30,000 years by indigenous Australians. The explorer James Cook’s first Pacific voyage in 1770 were the first Europeans to map the east coast of Australia. They made landfall at Botany Bay which inspired a lot of British interest in the area. The first European settlement was by Arthur Phillip who founded Sydney as a British penal colony in 1788 following the landing of the First Fleet of convicts. Sydney was incorporated as a city in 1842 and the transport of the UK convicts to there stopped then. In 1851, a gold rush occurred in Australia fuelling further growth and immigration. Over the following century, Sydney was transformed from its image as a colonial outpost into what it is now as major global cultural and economic centre. Mass migration from Europe occurred after World War Two leading to the development of Sydney into one of the more multicultural cities in the world with over one third of the population speaking a language other than English at home. Economically, there is a significant number of foreign banks and multinational corporations based in Sydney and the city likes to promote itself as Australia’s financial capital and a leading financial hub. The University of Sydney was Australia’s first university, being established in 1850 and is regarded as one of the leading universities in the world. The State Library of New South Wales, opened in 1826 is the oldest library in Australia.

Sydney is considered one of the more expensive cities in the world in which to live, however it does frequently rank in the top ten of the most liveable cities in the world. It has a fierce rivalry with the other main Australian city of Melbourne over this. This rivalry also extends to sporting events. The Sydney Morning Herald is Australia’s oldest newspaper that is still in print since being established in 1831. The other main newspaper is The Daily Telegraph which has been in print continuously since 1879.

Tourism is important to the Sydney economy with it being in the fifteen most visited cities in the world, visiting attractions such as the Sydney Harbour Bridge and the World Heritage-listed Sydney Opera House and also over 2,500,000 acres of nature reserves and parks. The main passenger airport that serves Sydney is Kingsford-Smith Airport which is one of the world’s oldest airports. A second airport is currently being built in the western suburbs. Central station which was built in 1906 is the main hub of the city’s rail network. Sydney often hosts major international sporting events, including the 2000 Summer Olympics which were claimed to be the greatest Olympics ever.

Descripition: Pandith Sai Shankar Baba is Famous Astrologer in Sydney Australia, Love Marriage Specialist in Sydney. The proportion of the...

Looking for Luxurious Modern Kitchen Designs in Sydney or Custom designer European Wardrobes in Sydney, Eurolife is the ultimate destination...