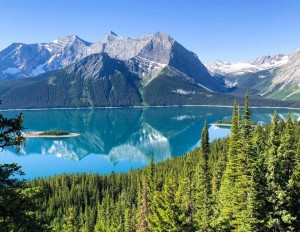 Kananaskis is both a Country and a Village in the park system of around 4000 square kilometres west of Calgary, Alberta in Canada and is part of the Canadian Rockies. Kananaskis Country is noted for the close proximity to recreation and tourism facilities. It is about 80 km or a one hour drive from Calgary. The community is located on the western side of the Kananaskis River at the base of Mount Kidd. The area was given its name in 1858 by John Palliser who named the Kananaskis River that flows through the area after an acquaintance in the Cree first nations community. There are four main highways that pass through the Kananaskis area. The main one being Highway 40 with a 66 km segment of the Bighorn Highway also being known as the Kananaskis Trail.

Kananaskis Village is an unincorporated resort community with several international level hotel accommodations and other amenities including the a Kananaskis Country 36-hole Golf Course, downhill skiing at both the Fortress Mountain Resort and the Nakiska Ski Area which hosted the freestyle moguls skiing during the 1988 Winter Olympics, equestrian facilities at Boundary Ranch and many trails for running, hiking, mountain biking, cross-country skiing and horse riding. The nearby competitive cross-country ski area, the Canmore Nordic Centre is open to the public. Hunting and fishing is also popular in the area. If the weather permits there are also rafting trips on the Kananaskis river. Cave and caving tours can also be taken. Further facilities and resorts are available at the nearby towns of Canmore and Banff.

The main hotel with 247 rooms is the Pomeroy Kananaskis Mountain Lodge which is part of the Autograph Collection run by the Marriot chain. It was previously called the Delta Lodge at Kananaskis. It is considered a rustic mountain resort. It is probably most well-known for its meeting, convention and wedding facilities. There are other lodges in the area including motels and bed and breakfast lodgings. Camping and recreational vehicle facilities are also widely available in the immediate area as well as in adjacent areas.

The area gained international prominence in 2002 when on June 26th and 27th the area hosted the 28th Summit of the G8 nations in Delta Lodge at Kananaskis in the Kananaskis Resort in the Village. This was the second time Canada has hosted the G8 Summit (the first being in 1981 in Quebec). The Summit is thought to have pumped around $300 million into the Kananaskis and Alberta economies, but there was controversy surround the alleged in excess of $200 million that security cost the Canadian taxpayers.

There are plenty of resources available to find out more about the region and what t do when visiting there. Kananaskis.com is one of the more popular website devoted to the region. Kananaskis is easily accessible by car, driving up from Calgary. There is no train service to the area, but there are several scheduled bus services available as well as several shuttle services from Calgary International Airport.

Amenities for Family holiday Trip in the Mantra Resorts near PuneThe mantra is the resort with amenities like a water park, Resort with...