The Beauty of Niagara Falls 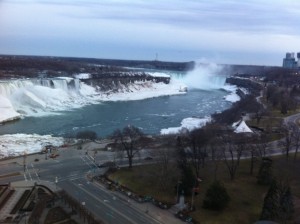 Niagara Falls are the three waterfalls at the southern end of Niagara Gorge which spans across the international border that is between the province of Ontario in Canada and the state of New York in the United States of America. Niagara Falls was formed when glaciers receded at the end of the last ice age about 10 000 years ago and water from the newly formed Great Lakes carved a path to the Atlantic Ocean. The largest of the three waterfalls is called Horseshoe Falls and also referred to as the Canadian Falls, even though it spans across the border. The two smaller falls, the American Falls and Bridal Veil Falls are within the United States. The Falls are on the Niagara River connecting Lake Erie into Lake Ontario. The flow rate of the combined falls is the highest of any waterfall in North America. During peak times more than six million cubic feet of water passes over the falls every minute. The Falls are between the cities of Niagara Falls, Ontario, Canada and Niagara Falls, New York, USA.

There is a balance between the commercial or industrial needs against the need for conservation and tourism. The Niagara River is an important source of hydroelectric power. Getting the balance right has been challenge for a very long time for the various authorities responsible for the region. The region is certainly famed for its beauty and spectacular sights of the falls. The peak number of visitors occurs in the summertime when Niagara Falls become both a daytime and evening attraction with floodlights illuminating both sides of the falls for several hours after dark. There was a big increase in the number of tourists to the region after a movie, called Niagara, staring Marilyn Monroe was released. The movie highlighted the natural beauty of the region and just how spectacular it was. Almost 30 million tourists now visit the region each year.

One the oldest and well known tourist attraction at Niagara Falls is the Maid of the Mist boat cruise, that has carried passengers along to river to the base into the rapids since 1846. A number of similar cruise boats operate from boat docks on both sides of the falls. The surrounding region as a number of other tourist attractions making the area a vacation destination. There are a number of resorts in Niagara on the Canadian side of the falls, such as the Niagara Fallsview Resort and others run by several of the major hotel chains.

There has been a long tradition of daredevils testing their luck and going over the falls in various devices with differing outcomes. The first and most well known was Sam Patch in October 1929 jumped from a high tower into the gorge below the falls. He survived, but others have not. Numerous attempts have been made to go over the falls in barrels and other devices. Some successful and some not. Tightrope walking on a rope or wire strung across the top of the falls often drew huge crowds to witness their exploits.

What Is The Best Niagara Falls Tour Package From Toronto? Niagara Falls boasts everything you need to have, the ultimate family vacation...

Niagara Falls Tour Package Niagara Falls is one of the favourite tourist destinations of the world. Visitors from the US and Canada go to...