A Brief Synposis of San Francisco 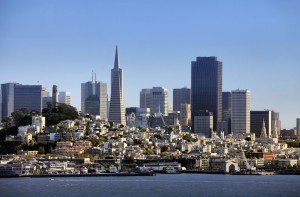 San Francisco is a city in Northern California, USA. It is officially both a City and a County. It has just under 900 000 residents covering an area of almost 50 square miles, making it the fourth largest city in California and 16th largest in the USA in terms of population. It serves as a cultural, commercial, and financial district. San Francisco is an expensive city which has the highest average salaries, disposable income, and median home prices in the world.

Archaeological evidence of human life in the territory of the city of San Francisco dates back to 3000 BC. San Francisco was first founded on June 29, 1776 by colonists from Spain who established the Presidio of San Francisco at the Golden Gate and Mission San Francisco de Asís. There was a rapid growth from 1849 because of the California Gold Rush which made it largest city on the West Coast of the USA at that time. The influx of treasure seekers became known as the ‘forty-niners’. In 1856 it was consolidated into a city-county. Around 25% of California’s population lived in San Francisco between 1870 and 1900. In 1906 over three-fourths of the city was destroyed by an earthquake and fire. It was quickly rebuilt after that. In 1915 it hosted the famed Panama-Pacific International Exposition. During World War II, San Francisco was the major port for service members embarkation to the Pacific Theater. A meeting in San Francisco in 1945 gave birth to what become the United Nations. After World War II San Francisco started to develop into what became a center of liberal activism in the USA. The combination of the returning servicemen, significant immigration from many other countries, the liberalizing of attitudes, along with the rise of the hippie counterculture movement, the Sexual Revolution and the Peace Movement in the Vietnam War lead to this liberalism. Not surprising the city votes strongly along liberal Democratic Party lines.

As a popular tourist destination, San Francisco is known for its cool summers, a mix of architecture, and landmarks. The well know landmarks include the Golden Gate Bridge, the cable cars, the closed Alcatraz Federal Penitentiary, Fisherman’s Wharf and its Chinatown district.

The major sports teams for the area are the Major League Baseball’s San Francisco Giants. They have played in San Francisco since moving from New York in 1958. The San Francisco 49ers (named after the gold rush in 1849) of the National Football League also call San Francisco home, even though they are now technically headquartered in Santa Clara. The Golden State Warriors play basketball in the NBA.

A Weekend in San Francisco

Weekends are time you get to draw yourself out of the daily busy weekday-monotony. Why not really make good use of these two days. So...