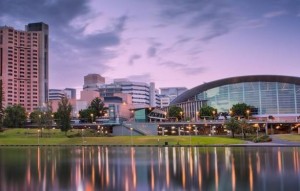 Adelaide is the capital city of the state of South Australia and the fifth biggest city in Australia. Adelaide is situated on the Adelaide Plains just north of the Fleurieu Peninsula located near the bottom middle of Australia on a map. It is a two-hour flight from Sydney and a 30-minute flight from Melbourne. Adelaide is probably most well-known for its numerous festivals and sporting events, its food and wine culture and its surrounding coastline and hills. It has a large defence and manufacturing sector.

Adelaide was proclaimed as a British settlement on 28 December1836. Before that the area around Adelaide was inhabited by the indigenous Kaurna people and known as Tarndanyangga which means the "place of the red kangaroo". Adelaide was named in honour of Queen Adelaide, consort to King William IV. One of Adelaide’s founding fathers, Colonel William Light, designed the city centre and chose its location close to the River Torrens. He set out the city centre in a grid layout known which were interspaced by wide boulevards and large public squares and surrounded by parklands.

The early settlers in Adelaide were diverse and it became known as the "City of Churches" due to its diversity of faiths and the churches that were built in the city. The current quality of life means that the city is consistently ranked as one of the top ten most liveable cities in the world. Adelaide is a popular tourist destination and a destination for international students in Australia due to its balanced lifestyle with world-class education institutions and its thriving local economy.

As Adelaide is the South Australia’s government and a commercial centre, it is the site of many governmental and financial institutions, mostly concentrated in the city centre. The largest employment sectors are health care and social care, though manufacturing is still a significant employer. The Adelaide Hills wine region is also an iconic and an important economic region for Australia in terms of wine production and sales. Tourism is vital to the economy and it is a gateway to well known places such as Kangaroo Island and the wine regions of the Barossa Valley, McLaren Vale and the Clare Valley. Local tourist attractions in Adelaide include the Adelaide Central Market, Adelaide Botanic Gardens, Adelaide Oval and the National Wine Centre.

Adelaide is also well known for the sports teams and sports played with the main sports played professionally in Adelaide being Australian Rules football, association football (soccer), cricket, netball, and basketball. Two Australian Football League teams: the Adelaide Football Club and Port Adelaide Football Club are based in Adelaide as well as one A-League soccer team, Adelaide United. There are two professional basketball teams, the Adelaide 36ers playing in the men’s National Basketball League (NBL) and the Adelaide Lightning which plays in the Women’s National Basketball League (WNBL). The Australian Formula One Grand Prix was held in the streets of Adelaide from 1985 and 1996 before moving to Melbourne. Since 1999 Adelaide and its surrounding areas have hosted the increasing popular Tour Down Under bicycle race.

Patrick Clare is a kitchens renovation in Adelaide, South Australia. We offer professional and personal kitchen renovations, both as an...