The Power of Minimalism in Game Design 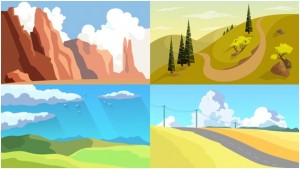 The modern gaming industry in most cases has moved away from the "brevity is the soul of wit" thesis. Large-scale projects with mega-realistic graphics that challenge the demarcation of the real and virtual world no longer even consider the concept of minimalism. We must say, that’s in vain: sometimes it is not necessary to overwhelm the players with the latest technological advances in order to convey a certain message to them.

Simple game design is the ability to focus on the idea rather than the visual. In the midst of a steady stream of similar games with cutting-edge graphics, a minimalist game can stand out and attract an audience that values more than just a pretty picture. Advanced game design companies are well aware of this and are keenly following minimalistic trends, making notes of successful techniques and approaches.

Before moving on to definitions, there is an important point to note. Game design ideas that are not very complex are not at all primitive. In a sense, the opposite is true. It is much more difficult to create a decent plot and idea that will not be supported by colorful levels and jaw-dropping visuals. With a successful scenario, such stories are much more exciting and addictive than the most advanced games of our time.

The artistic direction of minimalism marked its emergence with a complete rejection of all outdated art forms. Earlier detailing, metaphors and abstractions were a priority. Now simple shapes, restrained colors and an almost complete absence of details have come to the fore. Less emphasis on form and more emphasis on content.

Modern minimalist games have partially inherited these features. However, the technical features allowed the developers to add much more nuance. The developers of these games are not limited in the range of tools that help work miracles. For example, play with light and shadow, make eye-catching animations, add simple but interesting visual details, and more.

The design, of course, is closely intertwined with the storyline, which can sometimes be the basis of the game. Also, the main feature can be any element, in favor of which all the others will be much more limited in detail and color palette.

Examples of Minimalism in Video Games

To better understand how this style is used, it is necessary to look at a few of the most prominent examples. Games of this type are more versatile than photorealistic options. The system requirements for them are incomparably lower. Therefore, you can play them not only on a PC, but also on a mobile device, without experiencing any technical problems.

An indie platformer with a lot of puzzles looks pretty weird in the screenshots. But as soon as you dive into the gameplay, the polygonal characters acquire depth. Their fates become captivating. And the plot evokes a spectrum of unexpected emotions.

To get to the end of the level, you need to consider the advantages and possibilities of different shapes. There can be several options for achieving the desired result, and the game becomes more interesting. On top of that, the game is imbued with beautiful music and is perfectly stitched with a captivating narrative that makes you believe that it's not just about geometric shapes.

Among the minimalist game design ideas, Limbo became a real sensation. A gloomy gray-black platformer, which seemed to combine all the melancholy, sadness and ominousness of the colorless world, conquered players precisely because it did not seek to amaze them with graphics. It created its signature character, which turned it into a trendsetter for all subsequent games of this type. When the players say to each other "Ah, this is a game like Limbo!", then all the characteristic features of the game that have become its hallmark are already embedded in this comparison.

Limbo also has enigmatic ambient sounds, fluid, haunting environments with flawlessly incorporated puzzles and unique gameplay elements. The developers skillfully play with the emotions of the players, forcing them to observe various frightening scenarios of the death of a boy in the event of an incorrect solution to the puzzle. This encourages the players to play as carefully as possible, protecting the defenseless child from too dire a fate and helping him find his sister.

Minimalism is not limited to restrained shapes and colors. It is constantly evolving, taking on new forms and outlines, offering new options for interpreting complex and deep ideas. There is no need to classify games into simple and complex based solely on their graphics. An outwardly simple game can be very intense and multi-component, while a product with advanced graphics can be empty and meaningless.

Having chosen the path of creating a minimalist game, give preference to a game outsourcing company, which is primarily focused on the idea. Sometimes the most straightforward option may turn out to be the only correct one.

With lots of video games available in the market and the studios spending high on promotion through celebrity endorsement and TV ads, making...

Aniket Singh
Is minimalism your style? Know 6 key factors responsible for bringing in efficacy in designing!

Minimalism is quite a trend these days but sometimes it is misunderstood by the designers and they land up designing web pages meaningless...

Power BI Interview Questions What is BI?Business Intelligence (BI) is a set of technologies to analyze data and provide actionable insights...