Melbourne is the Sporting Capital of the World 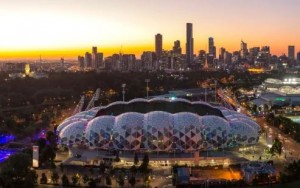 So why is Melbourne the sporting capital and how did it become the sporting capital? Firstly, the city has a rich sporting history and tradition. The city was founded in 1835 and sport was a feature of city life right from then, with the Melbourne Cricket Club being formed in 1838. The now famous Melbourne Cricket Ground (MCG) opened in 1853. It is still there and is now the largest sports arena in Australia. Different types of football became also popular in Melbourne’s early years eventually leading to its own sport – Australian Rules Football, or ‘footy’ as it is called by the locals. The first Melbourne Cup horse race was held in 1861 and is still held. The first Australian tennis championships was held in 1905 and is still held there. Melbourne hosted the 1956 Olympics.

Community sport is a significant part of the Melbourne way of life and participation rates in Melbourne are among the highest in the world. This is easily observed every weekend you can see just how dominant community sports is with people partaking and watching a wide range of sports such as cricket, tennis, footy, rugby, netball, basketball, baseball, golf and soccer. They play an important part of so many people’s social lives and wellbeing. When people in Melbourne are not playing sport, they are fans of watching sport. The Australian Football League grand final draws 100 000 people to the MCG. Rugby Union is not a well-known or a popular sport in Melbourne, but Melbourne stills hold the record for the greatest number of people to go to watch a game!

As well as the 1956 Olympics, Melbourne continues to hold world class sporting events. Each year, there is the Formula 1 Australian Grand Prix, the Australian Open Tennis Grand Slam, the Spring Racing Carnival, the MotoGP, the Boxing Day cricket test match and the Rip Curl Pro surfing competition. There are the major AFL, National Rugby League, or Australian A-League (soccer) matches on most weekend. There have also been other major one-off events such as the Commonwealth Games, the Cricket World Cup, World swimming championships and Asian Cup soccer.

All of this is supported by many world class sports facilities such as The Melbourne Cricket Ground, the Melbourne Sports and Aquatic Centre, Melbourne Park, Rod Laver Arena, AAMI Park, Hisense Arena, Etihad Stadium, Flemington Racecourse, State Netball and Hockey Centre, Margaret Court Arena and the Melbourne Grand Prix Circuit which is an infrastructure that is not close to being surpassed by any other city in the world. It is easy to see how and why Melbourne is considered the sporting capital of the world and why sport is such a part of the way of life in Australia.

Situated on the Yarra Waterway, Melbourne has the prettiest skyline in Australia. One of the highlights regarding Melbourne is that you can...

Increasing participation of European consumers in a range of sporting events, most preferably football, has spurred the demand for sporting...