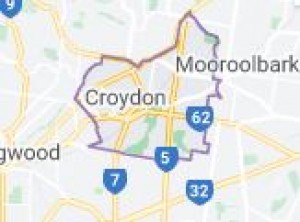 Croydon is a suburb in Melbourne, Victoria, Australia located about 28 km east of Melbourne's Central Business District. It has a population of almost 27,000 people. The land that eventually became Croydon was first used back in the 1840’s by settlers for grazing of farm animals. The first road through the area was called Sawmill road due to a sawmill nearby. Later it was changed to Oxford Road and in the 1900’s it was changed to what it is known today as Mt Dandenong Road. The area itself was first called White Flats as the area was heavy populated by a coarse silvery-white grass. The name of Croydon was given to it by the Lacey family who came from Essex, England who maned it after the Croydon in the United Kingdom that was Mrs. Lacey's hometown. Near the current Main St shopping precinct is a street named after the Lacey family.

Parcels of land in the area were first surveyed in 1868 and the area was first officially habituated with the area focusing on the farming of sheep, beef and dairy. There were also some sawmills established. After that, there were orchards that included apples, cherries, pears, peaches and plums that thrived. Some of the current street names in and around Croydon now reflect that early development. In 1874 Cobb & Co started a service with horses and carts to the area. A rail track to the area was opened on 1 December 1882 and the train station was called Warrandyte which was not actually in Warrandyte which was misleading as that area was a horse and coach ride 10km away. On 1 August 1884 it was renamed to be called the Croydon railway station. From the mid-1880s Mr James Hewish built his homestead and started several other business ventures that included a general store, news agency, butchers shop and a hotel. He also established various orchard trees. The Croydon Post Office was opened on 1 December 1883. The nearby Nelson's Hill Post Office opened in 1902 and was later renamed Burnt Bridge in 1979. On Mt Dandenong Road in 1908 Croydon Hall was built. Croydon was finally proclaimed and gazetted as being a town in 1912.

In 1920 a Monday market was started in Croydon which included live animals, chickens, birds and other small animals. It became a noted landmark in the area and a popular meeting place for locals from neighbouring suburbs until the site was redeveloped in the 1980s. It was finally closed down in 2012.

Administratively, Croydon was originally part of what was then the Shire of Lillydale, but in 1957 a request was submitted by officials for Croydon to leave the Shire of Lillydale and become its own governing entity. The City and Shire of Croydon was incorporated in May 1961 and was proclaimed as a City in 1971. Later, it was merged, along with the City of Ringwood to become the City of Maroondah in 1994. Today, the Main Street of Croydon is a thriving area hub with almost 200 traders.

Mr. Helper moving group can help make your move easier. This is the reason Mr. Partner just utilizes the best in the business, consistently...