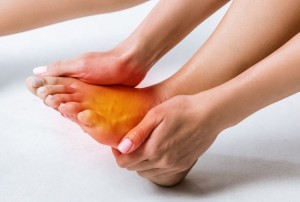 Burning feet is a common problem and hard to get to the bottom of and hard to deal with as it can often not be clear what is causing it. The burning feet syndrome is typically characterised by an odd sensation of burning and heaviness that occurs in the feet and legs. Historically, it was first described by Grierson in 1826 who was the first to document the symptoms of burning feet. A more detailed description was given by Gopalan in 1946, so at time the burning feet syndrome was also known as Grierson-Gopalan syndrome.

There is generally no specific aetiology or cause of burning feet syndrome and the cause is often idiopathic or unknown. It may be associated with nutritional or endocrine causes such as a vitamin B deficiency, the neuropathy that occurs in diabetes mellitus, in those with renal failure especially if on dialysis, or with hypothyroidism. It is more common in those over the age of 50 years but it can and does occur at any age. The symptoms are typically characterised by a burning sensation, a heaviness, a numbness or a dull ache that occurs primarily in the feet. It is usually only on the soles of the feet but may ascend to involve the top of the foot, ankles or up the lower legs in some cases. The arms and palms of the hands are typically not affected, but of they are, then this needs to be investigated further. Sometimes people may complain of 'pins and needles' or tingling type of sensation in the lower limbs. Typically, the symptoms are worse at night and are somewhat better during the day time. They are also not made worse with increased levels of activity or weightbearing which would indicate a musculoskeletal problem rather than the nerve involvement in burning feet syndrome. Examination of the feet and legs by a health professional typically finds no objective signs. A range of investigations, especially blood tests are often carried out to look for some of the specific conditions that can cause the problem.

The treatment of burning feet syndrome will either have specific measures that are aimed at the cause (eg diabetic neuropathy, pinched nerves, thyroid conditions) and general measures that can be helpful in all cases. These general measures include the wearing of open and comfortable shoes, maybe those with arch supports, and also wearing cotton socks is sometimes helpful. Relief from the symptoms can be brought about by the soaking the feet in cooler water for around 15 minutes. It is also important to avoid exposing the feet to sources of heat. There are pharmacological therapies that include tricyclic antidepressants and membrane stabilising agents (such as carbamazepine or gabapentin) that are used in the more severe cases. There are side affects associated with these drugs, but they are important at giving relief to the symptoms when it is needed. Even with the use of drugs, the management of the symptoms can be a difficult and some people will need to be assessed by a specialist pain clinic and given strategies to help live with the pain.

Flat feet may seem like a thing without any type of discomfort in the same but actually it's very much possible that the one who is having a...

To begin with, not many of us truly acknowledge the importance of maintaining the health of the skin of the feet. While it is true that...

People have different walks of life. There are fruitful and unsuccessful, big and small, short and tall, and so on. Every individual has a...