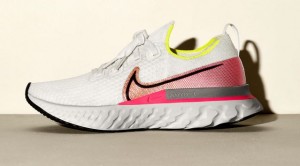 About a year ago, Nike released the new Nike React Infinity running shoe with the bold claims that it can reduce running injuries by 52% and that they had research to back that claim up. You have to be careful making such health claims about products as they can be and have been the reason for legal action and settlements with the regulatory authorities in the past. As of writing this, the study that backs up the claim has not been published for peer review and all that is available is an abstract of the results of the research. The research was conducted by a university for Nike. The study divided 226 runners of all ages and abilities into two different groups as they were training for a half marathon. Half of the runners used the Nike Structure which is a traditional motion control running shoe and the other half used the new Nike React Infinity Run shoe. The results showed that runners wearing the React Infinity had a 52 per cent lower injury rate than those in the motion control running shoe. The wearers of the React Infinity also noted that they felt less pain in their knees and feet from the running. These results look promising, but the research does need to be put under greater scrutiny before it is blindly accepted.

A lot of these issues are regularly debated and litigated in many different places. An episode of the livestream, PodChatLive was devoted to the above issues. In that episode the two hosts (both runners) discussed the topic with Michael Nitschke who is a podiatrist, a good runner and a running coach. In a thread on the forum, Podiatry Arena, there is a lot of commentary on the Nike claims about their Nike react reducing injury rates. Given the wide range of differing views and opinions this is an issue that is not going to be resolved anytime soon.

Many years ago, Nike air shoes were introduced to the world by Nike Company, then the shoe industry was reformed. Through the application of...

Finding the right running shoes is paramount. It’s not just only for athletes and sports people. Even an everyday person likes to go out and...

Running shoes are getting advanced day by day, but still they are made up of man-made products having distinct lifespans. Therefore, they...