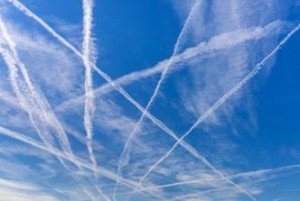 Chemtrails are nothing more than a silly made up conspiracy theory, mostly from those who must have failed high school science. The chemtrail conspiracy theory claims that the normal long lasting condensation trails (contrails) from planes are "chemtrails" that consist of chemical or biological agents left in the sky and are sprayed for nefarious purposes. Those that believe in this theory (chemtards) claim that while normal contrails dissipate relatively quickly, contrails that linger must contain additional chemicals to make them last longer. They speculate that the purpose of the chemical release may be for many sinister and not so sinister reasons such as management of solar radiation, weather manipulation, psychological manipulation, control of the human population, biological or chemical warfare. They also claim that the chemtrails are causing respiratory illnesses and other health problems in the population.

All of the claims made can be easily dismissed and the scientific community have explained contrails and dismissed the conspiracy. There is simply no evidence that purported chemtrails differ from normal water based contrails that are normally left by high-flying aircraft under certain atmospheric conditions. The conspiracy theory persists despite scientists and government agencies around the world having repeatedly explained that the supposed chemtrails are just in fact normal contrails. This does not appear to have made any difference to those who believe in the conspiracy theory.

Another way of looking at it, is that if it was true, then this would have to have been agreed to by every country in the world. Every major airline in the world would have to agree to spray them. This would involve hundreds of thousands of pilots and airport staff, weather forecasters and observers, every University with a meteorology or atmospheric physics department and every organisation that monitors air quality. They would all have to agree to remain silent. This would be an unprecedented global understanding and co-operation that whoever is behind it, if it was true is deserving of a Nobel prize. No one who believes in the conspiracy of chemtrails (ie the chemtards) has been able to explain how this unprecedented co-operation is working with no one spilling the beans on it.

Yet another way of looking at it is just the infrastructure of delivering the chemtrails if it was true. It has been calculated what would be needed to just spray the USA with the alleged chemicals that are claimed by the chemtards as being used. It was worked out that that the government would need to schedule four million 747 flights to spread their chemicals each week for it to work. That is eighteen times more flights per day than in the entire US. On top of that their would have to be the infrastructure and personal to support such a massive enterprise (that would also have to keep silent about what they are doing). Also, this would just be for the for the USA and a similar infrastructure would be needed for every country in the world. None of those believers in chemtrails has been able to explain this.

Selling a property is never an easy process, as it can take a long time to actually find a buyer. However, compromises should not be made...

San Mateo, Monterey and Mountain View, California are all great options when searching for a home. We have compiled some of the best facts...

Real estate is an industry that plays by its own rules. As technology, incomes, buying habits, and lifestyles change, real estate will only...