What is Duchenne muscular dystrophy? 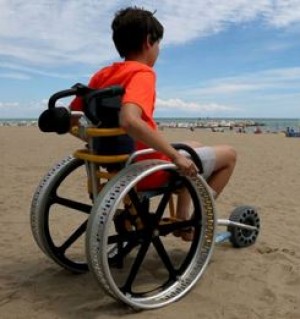 Duchenne muscular dystrophy (DMD) is a genetic disorder that is characterized by a progressive muscle degeneration and the development of weakness due to the alterations of a protein called dystrophin which is needed to keep muscle cells intact. DMD was first described by the French neurologist Guillaume Benjamin Amand Duchenne in the 1860. DMD is one of several conditions in a group known as the dystrophinopathies which also includes Becker Muscular dystrophy. The onset of DMD symptoms is usually in early childhood. The disease primarily affects boys, but girls are affected on rare occasions. The prevalence of DMD is approximately 6 per 100,000 individuals.

The key symptom of DMD is muscle weakness that can begin as early as age 2 or 3. The weakness first starts to affect the proximal muscles which are those that are closer to the core of the body. It is not until later that the distal limb muscles are affected. Usually, the lower limb muscles are affected before the upper limb muscles. The affected child usually presents with having difficulty jumping, running, and walking. Some of the other symptoms include an enlargement of the calves, a waddling type of gait, and an inward curve of the spine. Later on, as the heart and respiratory muscles become affected as well, leading to complications there. The progressive weakness and spine muscle weakness results in an impaired pulmonary function, which can eventually cause an acute respiratory failure, which may be fatal. Becker muscular dystrophy is a similar to DMD, but the onset is usually in the teenage years and the disease course for it slower and is less predictable when compared to DMD.

In 1986 researchers identified a particular gene on the X chromosome that, when flawed (mutated), leads to DMD. The protein associated with this gene was soon identified and named dystrophin. It was this lack of the dystrophin protein in muscle cells causes them to be fragile and easily damaged. DMD has an X-linked recessive inheritance pattern and it is passed on by the mother, who is referred to as a carrier. The females who are carriers have a normal dystrophin gene on one X chromosome and an abnormal dystrophin gene on the other X chromosome. Almost all carriers of DMD do not themselves have signs and symptoms of the disease.

There is no cure for Duchenne muscular dystrophy but the treatment can help extend the time a person with the disease can remain mobile and help with heart and lung muscle strength. The treatment options include medications, physical therapy and occupational therapy, and surgical and other procedures. Ongoing assessments of walking, swallowing, breathing and hand function are done by the treatment team so they adjust treatments as the disease progresses. In the recent past boys who develop Duchenne muscular dystrophy usually did not survive much beyond their teen years. More recent advances in cardiac and respiratory care has led to life expectancy increasing and many young adults with DMD can now attend college, get married, and have children. Survival into the 30’s is now common.

Muscular Dystrophy is a genetic disorder that adversely affects the muscles by weakening the muscles that are involved in the movement of...

Duchenne muscular dystrophy (DMD) is a genetic disorder characterized by progressive muscle degeneration and weakness. DMD is caused due to...