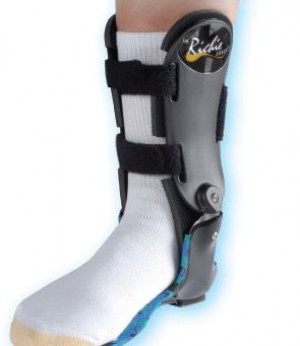 A progressive worsening of a flat foot or fallen arch in an adult is often called posterior tibial tendon dysfunction or adult acquired flatfoot and can have serious consequences if not detected early and addressed. This is more common in older and overweight adults. The primary concern is that the posterior tibial muscles which are responsible for holding up the arch of the foot is no longer efficient at doing that, so a progressive flattening of the foot occurs. As well as a flattening of the arch of the foot there is typically increasing discomfort and pain in the arch of the foot and the ankle joint. As it progresses, further walking becomes increasingly harder and is very fatiguing.

There are typically 4 stages of posterior tibial tendon dysfunction that the condition progresses through with 1 being the early stage and 4 being the end stage that only surgery can fix. There is some disagreement of the staging of this with some variability between health professionals and some reliability issues. Having said that, stage 1 is typically managed with foot orthotics and exercises and some relief for the pain. Stage 2 typically needs more aggressive and supportive foot orthotics, continuing with the exercises and increasing levels of pain relief treatments may be needed. Both stage 1 and 2 will benefit from high top supportive footwear. Long term weight loss plans are also going to be helpful. If this does not halt the progression and the foot is heading towards a stage 3, then there is increasing likelihood that reconstructive foot surgery is going to be needed. This is why it is so important that there be more aggressive conservative treatment of the foot when it is still in stage 2 to halt the progression.

An increasingly common treatment for posterior tibial tendon dysfunction as it progresses to stage 2 is the Richie Brace. This brace is being widely used and has been shown to be very successful at halting the progress of this condition and avoiding the need for surgery. Surgical interventions are often successful, but there is always a residual amount of disability left over as the surgery usually does require the fusing of some joints and the transfer of muscles insertions to other parts of the foot. The Richie brace is a combination of an aggressively made custom foot orthotic and an ankle foot orthoses with struts to support both sides of the ankle joint. The custom foot orthotic is made of a plaster cast or optical scan of the foot with the foot held in a corrected position. The purpose of the foot orthotic part of the Richie Brace is to try and hold the foot in that corrected position. The struts that get added up the side of the ankle are hinged at the ankle joint to allow movement to occur at the ankle joint. Those struts are then held by Velcro to the leg to further support and enhance the effect of the foot orthotic. If the progression of the problem can be stopped using this, then surgery is typically avoided.

If you are having the expectation of getting the last minute funds for the short period of time, you can choose the online mode that is full...

Most people use a neck brace to help ease the pain and stiffness caused by an injury to the neck. The neck brace keeps the weight of the...

Sportspersons are highly prone to injuries because of their frequent movements and sudden jerks encountered during the course of the play...