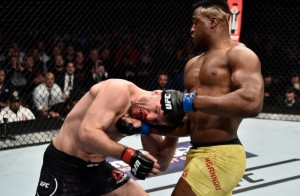 Every time UFC heavyweight champion Francis Ngannou steps into the caged octagon, he’s in for a fight.

This is the part where we say Ngannou has the "fight of his life" ahead of him. However, that wouldn’t be remotely accurate for the 34-year-old. That’s because the fight Ngannou survived just to get to UFC in the first place will never be outdone in difficulty. Let’s trace back Ngannou’s path to the UFC that includes aspiring dreams, broken dreams, and finally, dreams accomplished.

Strength Born Out Of Childhood Struggle

There’s no fighter currently in the UFC with as devastating knockout power as Ngannou. Not even close. He’s won five bouts in a row all by KO — including four of those within the first minute of his fight.

But you know where Ngannou draws that power? From a poverty-stricken childhood spent working tirelessly. At the early age of 10 years old, Ngannou shoveled sand at a mine. There was no other option for Ngannou whilst growing up dirt poor in Cameroon. School and friends were afterthoughts to just surviving.

Even with a low-paying job, survival wasn’t guaranteed for Ngannou. His parents split up at the age of six, forcing him to shuffle back and forth between broken homes. It wasn’t uncommon for Ngannou to dig through trash cans to find any semblance of a meal he could.

Dreams Of A "Better Life"

Ngannou idolized Mike Tyson as a child. This led him to train in boxing during his early 20’s. Of course, he excelled at this, but there was a glass ceiling to his training in Cameroon. To truly maximize his in-ring potential, he needed to go elsewhere for better instruction — and for him, that was France.

However, immigrating north to Europe was far from a clear path. Ngannou trekked through multiple countries illegally in Africa, but getting past Algeria proved to be the most dire. The Sahara desert covers most of the country. Ngannou walked and walked through the endless desert, nearly dying of dehydration. Upon crossing the desert, he drank from the only source of water he saw — a well infested with dead animals.

Unfortunately for Ngannou, this was not the last time he’d walk that dry, miserable desert. He did so on six other occasions as border patrols would catch and deport him back while trying to enter Spain from Morocco.

At last, Ngannou made it to Spain, but not without a two-month prison stay first. Upon being released from jail, he finally made it to France. One problem, though, he didn’t have a home in his new country. Here again, Ngannou was forced to sleep in the streets and dumpster dive for food.

Fighting His Way To The Top

Ngannou scoured the streets of Paris for a boxing coach. He didn’t have a dollar to his name, but he’d tell would-be coaches, "I'm not here to beg. I just need some place to train because I'm going to become world champion."

Eventually, he found trainers, but they weren’t convinced his future was actually in boxing. Instead, they advised him to pursue mixed martial arts. Ngannou didn’t even know what MMA was at the time, but caved in with time. And as they say, the rest is history.

In Europe, Ngannou quickly made a name for himself in MMA. Despite the late start to his training (his debut wasn’t until age 27), he jumped off to a 5-1 record. UFC brass, ever the opportunists, saw his hulking 6-foot-4 and 250-pound frame and signed him to a contract.

Since joining the UFC, Ngannou has been a one-man wrecking crew. He’s 11-2 in the promotion with all but one of those victories coming from KO. At last, he reached the mountop with a victory over Stipe Miocic to become world champion — exactly what he told coaches in France he would become.

We would say "what a story" but the thing is, the story is still being written. Ngannou is far from done in the octagon. If you ask him, he’s only just getting started.

Love Story She waited in her balcony, trying to be discreet. She had earphones plugged in her ears with her favourit

Love Story These was good kids once, I thought to myself. I'd watched them growing up for years. Here I am, rocking in my chair on the porch...