The Overland Train in Australia 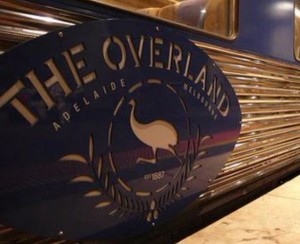 The Overland is the iconic train that travels between Melbourne and Adelaide in Australia and has been serving the route for over 130 years, starting in 1887. The train journey is through countryside that is a large part of Australia’s heartland and history. The name of the train is the ‘Overland’, but it does get mistakenly called the ‘Overlander’ quite often. This train was Australia’s first interstate passenger train running between state capitals. This train first begun in 1887 after the railway line between Melbourne and Adelaide was constructed. The train was at first run as a joint venture by the Victorian Railways Corporation and the South Australian Railways Corporation and at that time it was called the ‘The Inter-colonial Express’ and later called the ‘The Adelaide Express’. The train runs between Melbourne’s Spencer Street station (now called Southern Cross Station) and the Adelaide station in North Terrace, Adelaide. The train used to run overnight and included sleeping cars and sitting cars and for some years a dining car.

The train was renamed as "The Overland" in 1926. In the late 1940s a new fleet of steel-bodied air-conditioned carriages was built and added to the service. The original steam locomotives were replaced with diesel locomotives in 1953. In 1997 the service was taken over by Great Southern Railway after being privatized by the government. It is now run by a private company with the business name of Journey Beyond. After 120 years of running overnight, the timetable was changed to being a daylight train. The train now runs twice per week each way between Melbourne’s Southern Cross Station, in Spencer Street, Melbourne to the Adelaide Parklands Terminal in Keswick, South Australia. The train does stop at several towns along the way to pick up and drop off passengers. The train now departs Melbourne every Tuesday and Saturday morning at 8:05am, arriving at Adelaide Parklands Terminal at 5:40pm. The trip lasts pretty much all day. Coming back, the train departs Adelaide Parklands Terminal at 7:45am and arrives at Melbourne Southern Cross station at 6:50pm. The train has two classes of travel, standard and premium (first class) and has a lounge/dining carriage.

There is some political uncertainty surrounding The Overland. Airfares between Melbourne and Adelaide are priced much less than the train fares which makes it hard for the train to be competitive given the travel times. Since 2007, the train has continued to operate with a $1.5 million annual subsidy from the Victorian State Government. The South Australian Government supports the service as part of a $1 million deal with the company. Comments have been made with the subsidies will not be continuing with the current agreement with the Victorian Government in place until June 2023. The South Australian government stopped supporting the train in 2018. The argument for the subsidies is the provision of the train service to rural communities between Melbourne and Adelaide as some of those communities are quite reliant on the train service as their only means of transport for many.

Get the best Overland Park printing services for your business

It is a no surprise that most business owners require the services of a printing company every now and then either to print the flyers...

When mind and body get tired and fed up of hustle and bustle of daily life, people often want to escape in another world. This is where...

Oral health is the mirror that reflects the overall health of an individual. There is no ways about it. People often neglect visit to the...