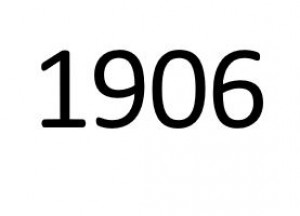 The calendar year of 1906 was most notable for the number and severity of the natural disasters. On January 31 there was an 8.8 magnitude scale earthquake mostly affecting Ecuador and Colombia that also triggered a tsunami that reached as far as Hawaii and caused at least 500 deaths. On the 5th of April Mount Vesuvius erupted, devastating Naples and killing more than 100 people. The amount of lava ejected was the most ever recorded from a Vesuvian eruption. In Italy they were preparing for the 1908 Summer Olympics when the eruption occurred and funds had to be diverted from that to reconstructing Naples, and a new site for the Olympics had to be found. On April 18th a magnitude 7.8 earthquake on the San Andreas Fault destroyed a large part of San Francisco, California. After the earthquake, fires soon broke out in San Francisco and lasted for several days. Over 3000 people died and over 80 percent of the city was destroyed. This natural disaster is one of the worst and deadliest earthquakes in the history of the USA. The death toll was the greatest loss of life from a natural disaster in California. An explosion at a coal mine on March 10 in Courrières, France killed 1060 miners. In August a magnitude 8.2 earthquake in Valparaíso, Chile leaves approximately 20000 injured. On September 18, a typhoon with a tsunami killed about 10000 in Hong Kong. A magnitude?7.9 earthquake in Xinjiang, China kills nearly 300 people on December 22.

Other notable events of 1906 was that Theodore Roosevelt is the 26th President of the USA. He was president from 1901 to 1909. On February 7, the Royal Navy’s ship, the HMS Dreadnought was launched. This sparks a naval race between Britain and Germany vying for naval supremacy with the first Imperial German Navy submarine, the U-1 being launched on August 4. The world’s largest ship at the time, the Cunard liner RMS Lusitania is launched in Glasgow on June 7. The first Grand Prix was held on closed public roads outside the city Le Mans, France in June. The circuit is most well known now for the 24 Hours of Le Mans race which held annually. On September 30 the first Gordon Bennett Cup in ballooning is held from Paris to Yorkshire, England. The race is still held every year. In October, there is a diplomatic crisis between the USA and Japan when the San Francisco public school board orders Japanese students to be taught in racially segregated schools. In December, the London Underground’s Great Northern, Piccadilly and Brompton Railway lines are opened. The morse code for SOS becomes an international distress signal on November 3. A well-known brand, Xerox is founded in Rochester, New York as the Haloid Photographic Company. A notable health care event in 1906 was that the BCG vaccine to prevent tuberculosis was first developed but was not used medically until 1921. It proved to be very effective and is given to babies as one dose and has significantly lowered the rates of tuberculosis globally.