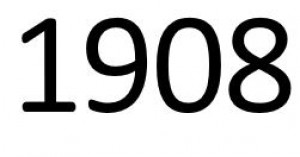 The calendar year of 1908 was notable for a number of events. 1908 was reported by NASA as the coldest recorded year since 1880. The year started with Ernest Shackleton setting sail on the Nimrod from New Zealand for his exploration of the Antarctica. The aim of the scientific expedition was to reach the south pole, but he failed to get there, but did get a number of scientific observations on Antarctica done. On January 24, Robert Baden-Powell’s book, Scouting for Boys was published in London. The book eventually sold well over 100 million copies and was the catalyst for starting the worldwide Boy Scout movement. The first Scout troop outside of the United Kingdom is formed in Gibraltar on March 27 and it grows from there. Starting in February, the 1908 New York to Paris automobile race takes place. This race was a considerable challenge especially given the state of car technology then and road infrastructure existing at the time. Only three of six contestants completed the course with the winner being the American team. At the end of June, the so-called Tunguska event or "Russian explosion" takes place near the Podkamennaya Tunguska River in Krasnoyarsk Krai, Siberia, Russia. It leaves trees flattened over a very large area. The reason for it is not known, leading conspiracy theorists to claims that it was probably aliens. The most likely explanation according to scientists, is that it was caused by the air burst of a large meteoroid or comet fragment at an altitude of 5–10 kilometres above the Earth’s surface. The conspiracists do not believe the probable scientific explanation.

The 1908 Summer Olympics are held in London from July 13 to 25. These Olympics were originally scheduled to be in Rome in 1906, but had to be changed to London due an eruption of Mount Vesuvius causing substantial damage and the need to divert resources away from the potential Olympics to repair the damage of the eruption. Johnny Hayes from the USA sets the first world record for running the marathon with a time of 2:55:18.4. On October 1, Henry Ford’s Ford Model T automobile is launched with an initial price set at US$850. It was generally regarded as the first affordable automobile, which opened car travel to the middle classes. The relatively low price was mostly because of Ford’s revolutionary efficient assembly line production and fabrication instead of individual handcrafting method of producing cars used previously. Production of the car discontinued in 1927. There were a number of disasters in 1908 including the Collinwood school fire near Cleveland, Ohio that killed 174 people. A rail disaster on April 20 in Melbourne, Australia killed 44 people when there was a rear-end collision of two trains. A typhoon in Hong Kong sinks the passenger steamer Ying King, causing 421 deaths in July. On September 17 near Fort Myer in Virginia, Thomas Selfridge becomes the first person to die in an airplane crash. The plane was piloted by Orville Wright who was severely injured in the crash but he recovered.