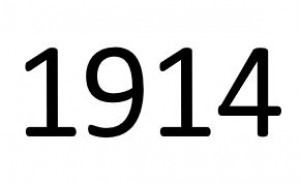 The calendar year of 1914 was most notable for the events that led up to World War I in the first half of the year and then in the second half of the year the spreading and escalating battles of World War 1. It all started with the assassination of Archduke Franz Ferdinand of Austria who was heir to the Austrian throne by the Serbian nationalist Gavrilo Princip. Over the next 6 months various other events and hostilities took place leading to Austria-Hungary declaring war on Serbia by sending them a telegram on July 28 starting World War I. On the 1st of August, the German Empire declared war on the Russian Empire after Russia’s military mobilization in support of Serbia. Germany also begins mobilisation. France also orders a general mobilisation. A week later Germany declared war on Belgium and the Kingdom of Montenegro declared war on Austria-Hungary. The next day Austria-Hungary declares war on Russia. Next it was the United Kingdom’s turn to formally declare war on Austria-Hungary. On August 23, Japan declared war on Germany. In October Canada send 25 0000 troops to Europe to help the allies. On November 5, Britain and France declare war on Turkey. Various battles and fights continue through the rest of the year of 1914.

These events of World War 1 overshadowed a lot of other things that happened in 1914, but some of them were still quite notable. On the oceans, the ocean liner that will become HMHS Britannic, sister to the RMS Titanic, is launched at the Harland and Wolff shipyards in Belfast on February 26. On May 30, the ocean liner RMS Aquitania makes her maiden voyage and on July 11 the USS Nevada, which is the United States Navy’s first "super-dreadnought" battleship, is launched. However, on May 29, the ocean liner RMS Empress of Ireland sinks in the Gulf of St. Lawrence with the loss of 1012 lives. In the air, there was the launch of the first airline to provide a scheduled and regular commercial passenger service with heavier-than-air aircraft. The plane was on the St. Petersburg–Tampa Airboat route.

Other notable events of 1914 are that on February 12, in Washington, D.C. construction started on the Lincoln Memorial as the first stone is put into place. On February 13, in New York City, the American Society of Composers, Authors and Publishers is established. This was significant as it was the first step in the process to protect the copyrighted musical compositions of its members and the beginning of copyright laws. Baseball legend Babe Ruth makes his major league debut on July 11 playing with the Boston Red Sox. On September 3, Pope Benedict XV (Giacomo della Chiesa) succeeds Pope Pius X to become the 258th pope. On, December 5, The Imperial Trans-Antarctic Expedition by Sir Ernest Shackleton begans in an attempt to make the first land crossing of Antarctica. The expedition failed to accomplish this objective, but it has become recognized instead as an epic and extraordinary feat of endurance.