What were the significant events of 1920? 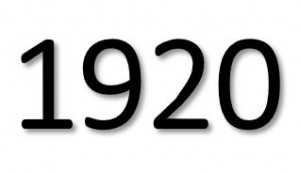 The calendar year of 1920 was notable for a number of events. During that year, the Mexican Revolution took place and by the end of the year there was a change of government and there was also the Irish war of independence. During the year there were a number of local regional conflicts and skirmishes in Europe following the end of World War 1. The Treaty of Versailles that ended that war takes effect on January 10, officially ending World War I. However, on March 19 the United States Senate refused to ratify the Treaty of Versailles. On January 16, The League of Nations Covenant comes into force with the organization holding its first council meeting in Paris, France. Other conflicts during the year included the Palestine riots on the April 4 with violence erupting between Arab and Jewish residents in Jerusalem where 9 are killed and 216 injured. There was a bombing on Wall Street in New York City with a bomb in a horse wagon exploding in front of the JP Morgan Building, killing 38 and injuring 400. In February Adolf Hitler presented his National Socialist Program in Munich to the German Workers' Party which renames itself as the Nazi Party. On September 29, Adolf Hitler makes his first public appearance in Austria, with speeches in Vienna, Innsbruck and Salzburg.

There were a number of natural disasters during 1920 that included on February 20, an earthquake that hits Gori in the Democratic Republic of Georgia resulting in the death of 114 people. On January 3rd the Xalapa earthquake in Mexico kills over 600 people, making it the second deadliest earthquake in Mexico’s history. On March 28, the Palm Sunday tornado outbreak hits the Great Lakes region and the Deep South of the United States resulting in many deaths, injuries, and much property damage. On December 17 the Mendoza earthquake of magnitude 6.0 killed around 200 people in Mendoza Province, Argentina.

Other notable events in 1920 included the end to the Spanish Flu with an estimated 17 to 50 million deaths. This was the last global pandemic until the 2009 swine flu pandemic which occurs almost 90 years later. In August the 1920 Summer Olympics were held in Antwerp, Belgium. This was the first Olympics that the symbols of five interlocking coloured rings and the associated flag were displayed for the first time. It became the well-recognised symbol of the Olympic movement. On May 16 more than 30,000 people attended a ceremony in Rome for the Canonization of Joan of Arc which included 140 descendants of Joan of Arc's family. Pope Benedict XV presided over the rite, for which the interior of St. Peter's Basilica in Rome is richly decorated on the occasion. In late July and early August the first ever World Scout Jamboree is held at Olympia, London. On October 31, Dr. Frederick Banting of Canada first records in his notes his insight on how to isolate insulin for the treatment of diabetes. It was not until two years later that the first successful human trial of insulin occurred.

The case planner will negotiate with businesses, shop for the best services, and use previous contacts to enjoy the things you want at most...

Justin Clark
Looking for Denver Events near like Hotel Teatro? Consider these top Events in Denver in October

Visitors to Denver Hotels in October will find many popular Denver Events to enjoy. Hotel Teatro has impressive special offers for guests...

Www.accel-events.com If you’ve ever attended a trade show, social event or conference and thought, "With my network of contacts, I can do...