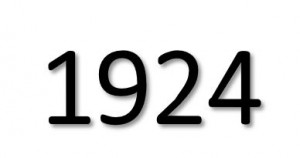 Looking back over the years, 1924 was one of those years that had no major earth-shattering events. A lot still went on in that year, but its hard to pick the major or big events like in other years, so here are 12 random events from 1924, one from each month. In January we had the first ever Winter Olympics, the 1924 Winter Olympics opened on the 12th in Chamonix, in the French Alps. On February 22 the USA president, Calvin Coolidge become the first President to deliver a radio broadcast from the White House. On March 3, the 407-year-old Islamic caliphate is abolished when Caliph Abdülmecid II of the Ottoman Caliphate is thrown out. The last remnant of that old regime gives way to the reforming government in Turkey of President Kemal Atatürk. On the 1st April, Adolf Hitler is sentenced to 5 years in jail in Germany for his participation in the 1923 Beer Hall Putsch for which he ends up serving less than 9 months. On May 11 the Mercedes-Benz car manufacturing company is formed by the merging of companies owned by their founders, Gottlieb Daimler and Karl Benz. On June 2, 1920 the USA President, Calvin Coolidge signs into law, the Indian Citizenship Act that finally grants citizenship to all Native Americans born within the territorial limits of the United States. Previously, the Fourteenth Amendment to the United States Constitution defined a citizen as any persons born in the United States and subject to its laws and jurisdiction, the amendment had previously been interpreted by the courts not to apply to Native peoples. On July 10 at the 1924 Paris Olympics the Finnish runner, Paavo Nurmi wins both the 1,500 and 5,000 m races within two hours of each other. In his career, Nurmi set 22 official world records at distances between 1500 metres and 20 kilometres.

On August 28, 1924, in Georgia there was an uprising in which Georgia revolts against rule by the Soviet Union in an abortive rebellion. It was aimed at restoring the independence of Georgia from the Soviet Union. In the rally, several thousand die after being supressed by the Red Army. In Belgium on September 9, the 8-hour workday is introduced. On October 12–15, 1920 the airship, Zeppelin LZ-126 makes a transatlantic delivery flight from Friedrichshafen, Germany, to Lakehurst, New Jersey, USA. This airship was mainly used for experimental work, particularly in the development of the American parasite fighter program and was decommissioned in 1932. In November, the last known sighting of a California grizzly bear is recorded, by Colonel John R. White at Sequoia National Park. This bear was particularly admired for its beauty, size, and strength and it became a symbol of the state of California with the state sometimes known as the "Bear State" because of that. Finally on December 30 1924, the American astronomer Edwin Hubble announces that Andromeda, previously thought to just be a nebula, is actually another galaxy. He also announced that the Milky Way which we are a part of is only one of many such galaxies in the universe. He played a crucial role in establishing the field of extragalactic astronomy and subsequently the Hubble telescope was named in his honour.