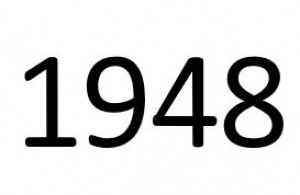 The year of 1948 was quite a notable year. There were a number of significant events that occurred and also a lot of non-significant events, but still of interest for their curiosity. The year started off on the 1st January with the General Agreement on Tariffs and Trade (GATT) being inaugurated. The GATT was a legal agreement between many countries with the aim being to promote international trade by reducing or eliminating trade barriers such as tariffs or quotas. Also on the 1st January, the railways of Britain are nationalized, to form British Railways. On January 30, the Indian leader Mahatma Gandhi is shot by Nathuram Godse in New Delhi. The 1948 Winter Olympics in St Moritz, Switzerland were opened on 30 January. In February, the United States stock car racing organization NASCAR is founded and starts organizing races. On March 8, in the case of McCollum v. Board of Education, the United States Supreme Court ruled that religious instruction in public schools violates the US Constitution. The battle over this is still going on today. On April 3 the United States President Harry S. Truman signs the Marshall Plan, which authorizes $5 billion in aid for 16 countries. The Marshall Plan is how the USA provided foreign aid to Western Europe. On April 7, The World Health Organization is established by the United Nations and on June 24th they hold the first World Health Assembly of the World Health Organization in Geneva. Also in April, the Organisation for Economic Co-operation and Development is founded, as the Organisation for European Economic Co-operation (OEEC).

On June 1, Puma, a global sports goods brand, is founded in Bavaria, West Germany, by Rudolf Dassler, having split from his brother Adi Dassler. This is part of the historic and bitter rivalry around the Puma and Adidas running shoe brands. Also in June, on the 24 the Cold War heats up with the starting of the Berlin Blockade with the Soviet Union blocking the Western Allies' railway, road, and canal access to the sectors of Berlin under Western control. On June 26, the Berlin airlift begins to get around the blockade. In the UK on July 5, the National Health Service begins functioning, giving the right to universal healthcare, free at the point of use. Also in the UK, on July 15, the first London chapter of Alcoholics Anonymous is founded. On July 26, the US President Truman signed on Executive Order, ending racial segregation in the United States Armed Forces. On July 29, the 1948 Summer Olympics begin in London. They are the first Olympics since the 1936 Summer Olympics in Berlin because of war. On October 6, a 7.3 magnitude earthquake occurs near Ashgabat, Soviet Turkmenistan with what is thought could be more than 100,000 people killed. On November 2 democratic presidential incumbent Harry S. Truman defeats Republican Thomas E. Dewey. The 1948 Nobel prize in Medicine went to Paul Hermann Müller for his work on the insecticidal qualities and use of DDT in the control of vector diseases such as malaria and yellow fever.