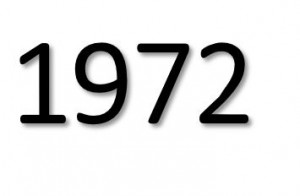 There were a lot of interesting things that happened in the year of 1972, and not all of them were of any great historic significance but were of interest. 1972 was designated at The International Year of the Book by UNESCO. At the start of the year Kurt Waldheim, a politician and diplomat from Austria, becomes Secretary-General of the United Nations. He served until 1981. There was a tragedy in New Delhi in India on January 21st where a bootlegger sold some wood alcohol to a wedding party and a 100 of them die from being poisoned. On the 24 January, a Japanese soldier Shoichi Yokoi is discovered in Guam where he had spent 28 years hiding in the jungle after he failed to surrender after World War II as he was not willing to accept that Japan had surrendered. Later in Japan he come a popular television personality and an advocate of a simple living lifestyle. At the end of the month, on the 30th there was Bloody Sunday in which the British Army killed 14 unarmed nationalist civil rights marchers in Derry, Northern Ireland. This further inflamed tensions between Northern Ireland and the British. The Winter Olympics take place from February 3–13 in Sapporo, Japan. On February 17, a milestone is reached by the Volkswagen Beetle as their sales exceeded those of the Ford Model T when the 15,007,034th VW Beetle was produced.

1972 was maybe most notable for the Watergate scandal where five operatives from President Richard Nixon’s White House are arrested for burgling the offices of the opposition Democratic National Committee. On June 23, the President and White House chief of staff H. R. Haldeman are taped talking about using the CIA in order to obstruct the FBI's investigation into these Watergate break-ins. This eventually led to the downfall and resignation of Nixon. On July 25, health officials in the USA admitted that African-Americans were used as guinea pigs in the Tuskegee Study of Untreated Syphilis in the Negro Male. This was a significant scandal and led to the development of new and stricter standards by which medical research is conducted. At the 1972 Summer Olympics in Munich there was a massacre in which eleven Israeli athletes were murdered after eight members of the Arab terrorist group Black September invaded the Olympic Village. Five of the terrorists and one policeman are also killed in a failed hostage rescue with all of the hostages being killed. The Israeli government then launched Operation Wrath of God, which authorized the secret service, Mossad to track down and kill anyone who had played any role in the attack in Munich. 1972 was the final Apollo mission to the moon with Apollo 17 lands on the Moon on December 11. On December 14th astronaut, Eugene Cernan becomes the last person to walk on the Moon, after he and fellow astronaut Harrison Schmitt completed the third and final Extra-vehicular activity (EVA) of Apollo 17 mission. Neither NASA in the USA or any agency from another country have sent a manned mission to the Moon since then.

After a cross-country move in which the family Chevy van suffered a rollover, this 128 got my family back on wheels In late December of...