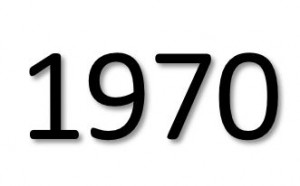 1970 was an interesting year for a number of reasons. It may be most notable for the number of disasters that happened, some big and some small. On January 5 these was a 7.1 Tonghai earthquake that affected Tonghai County, in the Yunnan province of China, with an estimated 10,000 and 15,000 people killed and over 26,000 injured. On February 1 the Benavídez rail disaster near Buenos Aires in Argentina with the derailing of a train killed 236 people. An avalanche at Val-d'Isère in France on February 10 killed 41 tourists to the area. On April 11 another avalanche at a tuberculosis sanatorium in the French Alps kills 74 people, most of them being young boys. On March 4, the French submarine Eurydice imploded while making a practice dive in the Mediterranean Sea killing all on board. In Osaka, Japan on April 8, a gas explosion at a subway construction site killed 79 people and injured over 400. On May 31 a 7.9 Mw earthquake in Ancash, Peru with a landslide buried the town of Yungay. It was estimated that between 66,000 and 70,000 people were killed. On July 3 all 112 people on board Dan-Air Flight 1903 are killed when the British De Havilland Comet crashes into mountains north of Barcelona in Spain. Another crash on July 5 with Air Canada Flight 621 crashing near Toronto International Airport, Toronto, Ontario killed all 109 passengers and crew on board. In Melbourne, Australia on October 15 a section of the new West Gate Bridge collapsed into the river below, killing 35 construction workers. On October 15 a cholera epidemic breaks out in Istanbul in Turkey that later spreads on October 28 to eastern Slovakia causing Hungary to close its border with Czechoslovakia. On November 13, a 120-mph tropical cyclone hits the densely populated Ganges Delta region of East Pakistan (in what is now known as Bangladesh), kills an estimated 500,000 people making it the 20th century's worst cyclone disaster. On December 12 there as a landslide in western Colombia that left 200 people dead.

In addition to the above disasters, the Vietnam war continues during 1970. On March 5, the previously agreed upon Nuclear Non-Proliferation Treaty goes into effect, after being ratified by 56 nations. The 1970 World's Fair opens in Suita, Osaka, Japan on March 15. On April 10, in a press release that was written in mock-interview style, that is included in promotional copies of his first solo album, Paul McCartney announces that he has left The Beatles. On December 31 Paul McCartney sues in the courts in Britain to dissolve The Beatles's legal partnership, putting an end to the group. On April 11, Apollo 13 with the astronauts Jim Lovell, Fred Haise and Jack Swigert on board is launched toward the Moon, however on April 13, an oxygen tank in the Apollo 13 spacecraft explodes, that forces the crew to abort the mission and return towards earth. The drama captivates the entire world with the splashing down safely in the Pacific Ocean on April 17th The first New York City Marathon is run on September 13.

The 1970 Plymouth Hemi-cuda was a redesign that got rid of all echoes of the Plymouth Valiant that had once been the foundation for the...