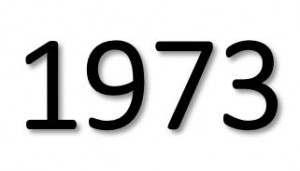 There was a lot that went on in 1973. The year started off with the expansion of the European Economic Community with the United Kingdom, the Republic of Ireland and Denmark joining on January 1. The European Economic Community later becomes the European Union. Peace negotiations continued from last year over the war in Vietnam. On January 15 the USA President, Richard Nixon announces the suspension of offensive action in North Vietnam citing progress in the peace negotiations. By March 17, most of the remaining United States soldiers begin to leave Vietnam. On January 22, the boxer George Foreman defeated Joe Frazier in one of the all-time classic fights to win the heavyweight world boxing championship. In the Chinese province of Sichuan on February 6, a 7.6 earthquake kills 2200 people and injuring 2700 others. On April 1 the United Kingdom introduces the Value Added Tax (VAT) into the tax system.

One of the ongoing sagas of 1973 was what became known as the Watergate scandal that started in 1972 with the break in at the Democratic party headquarters. On April 30, President Richard Nixon announces that White House Counsel John Dean has been fired and that Attorney General Richard Kleindienst has resigned along with staffers H. R. Haldeman and John Ehrlichman. This was done by Nixon to try and deflect some of the blame from him. However, on July 16 the former White House aide Alexander Butterfield informs the United States senate committee investigating the Watergate break ins that President Richard Nixon had secretly recorded potentially incriminating conversations. On October 20 in what became known as the Saturday Night Massacre, Richard Nixon orders that Attorney General Elliot Richardson to dismiss Watergate Special Prosecutor Archibald Cox. Richardson refused to do that and along with the Deputy Attorney General William Ruckelshaus resigns. The Solicitor General Robert Bork who was third in line at the Department of Justice, then fires Cox. This event raises calls for Nixon's impeachment. On November 1 the acting Attorney General Robert Bork appoints Leon Jaworski as the new Watergate Special Prosecutor. In Orlando, Florida on November 17 President Richard Nixon tells 400 Associated Press managing editors with his now famous quote: "I am not a crook." Follow more events in this case, Nixon resigned from office on August 9, 1974.

Other events that occurred in in 1973 included the "Battle of the Sexes" tennis match on September 20. In this Billie Jean King defeats Bobby Riggs in the televised tennis match, 6–4, 6–4, 6–3, played at the Astrodome in Houston, Texas. There was an attendance of 30,492 people making it the largest live audience ever to see a tennis match in US history, a record which still stands today. The global audience that viewed this tennis match on television in 36 countries is estimated at over 90 million people. Elton John releases his most successful album, Goodbye Yellow Brick Road on October 5. On October 20 the iconic Sydney Opera House is opened by Elizabeth II after taking 14 years to build. There was a lot of other events that happened in 1973.

About Omkar 1973 - New Launch Project in Worli Situated in the midst of a rich green and quiet environment, Omkar 1973 gives a feeling of...