What happened to the toning shoes? 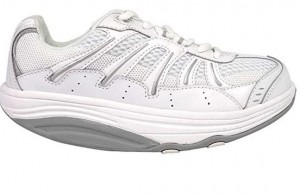 About 10 years ago, the toning shoes were all the rage. These were shoes that were supposed to help you tone up and get an extra workout when wearing them. Some even claimed to shape the ‘butt’ and cure cellulite. That did not work out too well for the companies with legal settlements and despite endorsements from celebrities they soon dropped from being popular.Toning shoes or what is also called unstable footwear is footwear that is deliberately designed with rockers and other design features to make the shoes unstable so that the muscles are supposed to work harder to increase stability. It is this increased muscle activity that was claimed to be an increased workout when wearing the shoes, ie a tone up. When the shoes came to the market the health claims and alleged benefits made for them were quite extraordinary. Several celebrities and sports stars were used in promotional material to support and promote the claims. Sales of these shoes were quite substantial on the basis of these claims and alleged benefits.Once the proper research was done on these toning shoes, it did not support the claims that were being made for the benefits of them. The research did show that muscle activity was increased and the gait was somewhat different when using the shoes, but it was not sufficient to give all the health benefits that were claimed for them. As these were health claims that were being made that were not be supported by the science then this caught the attention of the health and advertising regulatory agencies in many countries and they got involved in litigation. This ended up in substantial multi-million dollar fines and settlements by several of the companies who were making the false health claims. A number of class action lawsuits were also settled based on claims that those who purchased the shoes did not get the advertised benefits from them. This substantially affected sales and interest in these shoes and they pretty much faded away.There still are some shoes on the market that would be classified as toning or unstable shoes and there is still some research going on with them. All of this does not mean that there is actually anything wrong with these types of shoes. The problem was just the substantially exaggerated claims made for them and the marketing around that. These toning shoes do have their uses. Clinicians still find these toning shoes to be particularly useful for changing the way people walk with things like painful knee osteoarthritis and some people with low back problems that may be related to the way that people work. The logic is that if walking on way is painful, then if a subtle change can be made in the way they walk with the use of these shoes, then there may be a reduction in pain. The only problem with this approach is that the research is not clear and who will and will not benefit. They are also particularly useful for people who have painful big toe joints.

However what makes a superb set of two tightening shoes and boots along with exactly how when you choose the best? The following is the...

A good tool makes you better and adds to your skills. If you are going to play badminton on a regular basis, you need the right kind of...