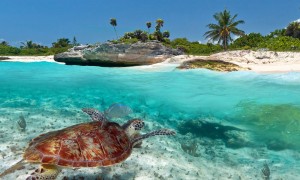 The Caribbean refers to an island chain of 28 countries that entices travellers to it with a range of idyllic tropical escapes located in the Caribbean Sea. Each of those countries has something unique about it to offer mostly based on their natural beauty of both the land and waters that surround the coastlines. The Caribbean is considered one of the world’s most biologically diverse marine regions, being home to iconic wildlife and has many vulnerable coastal communities that are suffering with what environmentalists consider an alarming decline. The Caribbean also has a rich history and culture, having some significant sites dating back to forgotten previous civilizations. Along with that cultural diversity, the Caribbean has an eclectic culinary scene. There are flavours from all the world’s continents in the region’s cuisine.

The main languages spoken in the region are Spanish, French, English, Dutch, Haitian Creole, and Papiamento. Every Caribbean country has a handful of unique creole languages or dialects. The region has a mostly tropical geography with the climates being shaped by sea temperatures and precipitation, with the hurricane season regularly leading to natural disasters. The most severe was the Great Hurricane of 1780 where it has been estimated that 20 000 to 30000 people were killed. Hurricanes continue to occur with a regularity. Because of this tropical climate and the low lying island geography, the Caribbean countries are vulnerable to a number of climate change effects such as the increased storm intensity, saltwater intrusion, rising sea levels and erosion of the coastline. These weather changes will have significant impacts and greatly change the economies of the islands, particularly the major economies of agriculture and tourism.

The indigenous people have occupied the Caribbean since at least 3600 BC. Not long after the explorer, Christopher Columbus came to the Caribbean in 1492 subsequent explorers from both Portugal and Spain began claiming territories in Central and South America and settling them. With this European colonization the indigenous population was quickly decimated due to the imposed brutal labour practices, enslavement, and diseases on many of the islands. These indigenous populations were soon replaced by enslaved Africans. These early settlements exported gold to England, the Netherlands, and France who each had wanted to establish profitable colonies in the Caribbean. These colonial rivalries made the Caribbean a source for European wars for centuries. The region was war-torn throughout much of its colonial history, but the wars were more often based in Europe, with only minor battles actually fought in the Caribbean. The Caribbean was known for pirates, especially between 1640 and 1680 with the term "buccaneer" often being used to describe a pirate operating in this region. Starting with the independence of Haiti from France in the early 19th century and the subsequent decline of slavery in the 19th century most of the island nations in the Caribbean gradually gained independence the 1950s and 60s. As the region is in close proximity to the United States, there is also a long history of United States intervention politically, militarily and economically.

Party Till You Drop At Caribbean Year-End Festivals

Ask most people to describe the Caribbean during the daytime and they’ll tell you about lush, tropical rainforests filled with exotic flora...

Lisa Jeeves
Here Comes the Sun - Wintering in the Caribbean

There are many things to love about and become excited for during the winter months, such as snow, holidays, and parties. However, while...

Who says you can’t bring your family for indulgent holidays in luxury hotels? Caribbean island resorts, for example, aren’t just for single...